Englesqueville-la-Percée in 1944 – Calvados – Battle of Normandy

On June 6, 1944, the 2nd Ranger Battalion (29th Infantry Division) stormed the Pointe du Hoc battery by climbing the cliff. Throughout the day, the Germans of the Grenadier-Regiment 916 (352. Infanterie-Division) counterattack from Englesqueville-la-Percée towards the battery and succeed in containing the American soldiers. Isolated elements of the 5th Ranger Battalion who survived the landing on Omaha Beach manage to cross the four-kilometer D-Day in hostile territory: a section of company A commanded by Lieutenant Parker. At 1430 hours, he left the commune of Vierville-sur-Mer with his twenty-four Rangers and headed for Pointe du Hoc. On the way, they are taken to task by a German defensive point and seize it, making two killed and twelve prisoners in the ranks of the adversary. The prisoners were immediately employed to guide the Americans along the secondary roads parallel to the coastal road (in particular to detect minefields).

Parker’s men cross Englesqueville-la-Percée and continue their progression (they reach the Pointe du Hoc at 9 pm). The next day, it was the turn of the 175th Infantry Regiment (29th Infantry Division) commanded by Colonel Paul R. Goode to head towards the small town of Englesqueville-la-Percée. The regiment is supported by two squadrons of the 747th Tank Battalion. The Americans from Omaha Beach in the east follow the coastal road and then turn south and reach the village on June 8 at 2 am, where they push isolated isolated elements that quickly fold. They then continue south, Sherman tanks at the head of the device. 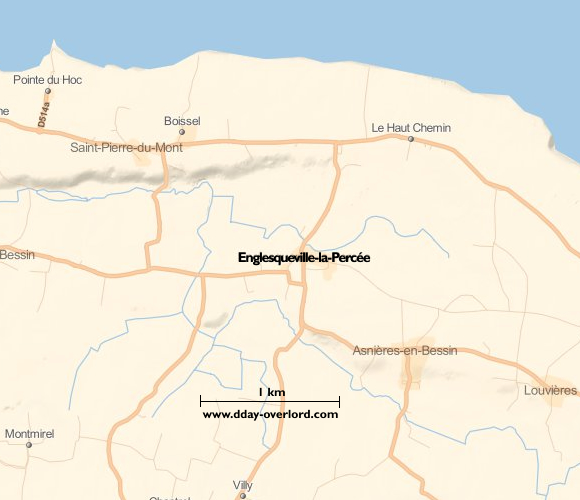