The six weeks of the siege of the city of Caen allow the German forces to fortify the defenses of many communes to the south, and Estrées-la-Campagne is one of them. In order to penetrate this enemy front in the direction of Falaise, the British trigger Operation Totalize on the night of August 7 to 8, 1944, which starts with aerial and land bombardments. Estrées-la-Campagne is then defended by elements belonging to the 85. Infanterie-Division as well as by the Kampfgruppe Wünsche (12. SS Panzer-Division “Hitlerjugend“) which is composed at this time of the 3rd and 8th squadrons of SS Panzer Regiment 12, the 1st and 3rd battalions of the SS-Panzer Grenadier Regiment 26, the 3rd Battalion of the SS Panzer Artillery Regiment 12 and a squadron of the Schwere SS Panzer-Abteilung 101.

On 9 August, on the second day of Operation Totalize, the Polish soldiers of the 1st Armored Division (“1 Dywizja Pancerna“) under the command of General Stanislaw Maczek relaunched their offensive at dawn after seizing the village of Cauvicourt The day before. They progressed parallel to the national road 173 (RN 173) and headed towards Estrées-la-Campagne. The Poles are in the second rank, behind the Canadian tanks of the 4th Armored Division which aim at the hill listed 195 on the maps of staff and located to the north of the village of Potigny. Two Canadian regiments (the 28th Armored Regiment “The British Columbia Regiment” of the 4th Armored Brigade and three companies of the Algonquin Regiment of the 10th Infantry Brigade) under the command of Lieutenant-Colonel Worthington (corps commander of the British Columbia Regiment, BCR ) Are engaged to seize this height which represents a major tactical point of interest. At daybreak, the BCR advancing at the top of the battle group is 2 kilometers east of Estrées-la-Campagne, near Hill 111: after a quick topographic point, Canadians who thought they had arrived at Proximity to point 195 realize that they have not taken the right direction. Indeed, instead of following the RN 173 towards the south, they followed the Chemin Haussé of Duke Guillaume, a Roman road that crosses the plain of Caen. Realizing his mistake, Worthington puts up a safety perimeter on Hill 111, which is based on the few hedges that can be found in the area and installs ground signaling devices to avoid potential Fratricidal attacks by Allied aviation.

When the last elements of the column (the BCR squadron A and the company D of the Algonquin Regiment) reached Estrées-la-Campagne, the Kampfgruppe Wünsche engaged the fight. The Germans, solidly defensive, cut their opponents to pieces, and only two Sherman tanks from Squadron A managed to retreat and no elements of that squadron and Company D could wait for Hill 111. Worthington installed from 7 am its troops on the hill 111 in a field of 300 meters long and 100 meters wide bordered with hedges and small wooded zones (north and south). Two large trees stand in the middle of this field and the lieutenant-colonel chooses the one most center of the device to install his command post. Without radio communication with his superiors, he decided to wait for reinforcements there; But since he is not on Hill 195 and is not in touch with the rest of the division, the staff can not send him reinforcement. Worthington entrusts the Armor Command to Major T. B. Baron, Commanding the BCR Squadron C: At this point in the battle, Canadians have 31 Sherman tanks and 1 light reconnaissance tank. These armored vehicles are positioned throughout the field perimeter and are reinforced by half-tracks carrying the infantry of the Algonquin Regiment. The latter are distributed as follows: Company C takes into account the south-east and south-west approaches of the field, Company B is installed to the north and company D must, after arriving at position, take into account Approaches.

At 0800 hours, elements of the Kampfgruppe Wünsche are attacking. German tanks and soldiers are standing in a woodland 700 meters south-east and Lieutenant-Colonel Worthington deploys armored elements twice outside his defensive perimeter to dislodge his opponents, but Canadians are suffering heavy losses, Especially during the second appointment at 9 am. However, they manage to reduce the opposing position and the survivors return to their starting point half an hour later. As of 10 am, the Germans launched a violent counter-attack in the direction of the Canadians with about 200 infantry supported by 4 tanks. They are repulsed with heavy losses. As soon as they had repulsed their opponents, Worthington gathered his chiefs of elements for an improvised situation, but a German shell destroyed his command-chariot and the explosion caused losses: AJ Primeau, company sergeant major of company C was killed While Lieutenant-Colonel AJ Hay is seriously wounded by a lash; A tourniquet is placed on his leg to stop the hemorrhage. At noon, half of Canadian combat vehicles are out of order. Worthington ordered the wounded to be loaded into six semi-tracked vehicles, which, covered with large red crosses, had to join the allied lines, but they were caught by the Germans during the journey.

Despite an early morning bombing pass, British Typhoon fighter bombers support the Canadians as best they can. Early in the afternoon, the Poles of the 1st Armored Regiment commanded by Lieutenant-Colonel A. Stefanewicz (10th Armored Brigade, 1st Armored Division) advancing at Saint-Sylvain, 4 kilometers northeast, Arrive progressively within range of Canadian defensive guns: shells are fired by Polish tanks until the men of Worthington fire smoke grenades to identify themselves as friendly elements. The Poles are engaged by the Germans at a distance of 1,500 meters and although they are only 300 meters away from the Canadians, they are obliged to retreat mid-afternoon, Too heavy losses. Shortly after 3 pm, Worthington ordered the surviving 8 tanks to retreat towards the allied lines while the infantrymen were firmly stationed in trenches dug into the hard ground. At 5:30 pm, a new German offensive was launched and a mortar shell killed Lieutenant-Colonel Worthington; Major Macpherson then took command of the survivors. The latter were ordered to withdraw at nightfall. In total, 47 Canadian tanks (44 Sherman, 2 Stuart, 1 Crusader) are destroyed out of the 52 engaged. The casualties amount to 240 for the Canadians: the BCR has 40 killed, 38 wounded and 34 prisoners while the Algonquin Regiment has 45 killed, 38 wounded and 45 prisoners.

The 1st Polish Armored Regiment, which reorganized to the northeast of Estrées-la-Campagne during the day of 10 August, resumed the offensive and reached the village which it freed during the night. 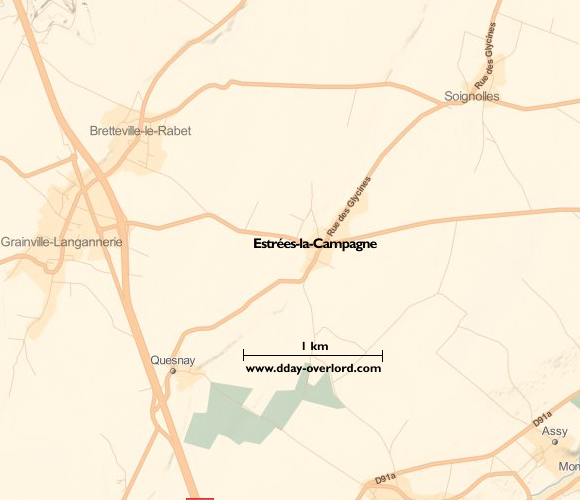