Etréham in 1944 – Calvados – Battle of Normandy

The village of Etreham was occupied on 1 June 1944 by the Germans of the Artillery-Regiment 352 (352. Infantry Division).

On June 8, 1944, the 3rd Battalion of the 26th Infantry Regiment (1st Infantry Division) commanded by Lieutenant-Colonel John T. Corley (temporarily attached to the 18th Infantry Regiment) progressed south and late morning patrols were sent In the direction of the village of Etreham to inform about the device of the adversary: ​​only snipers still seem to hold the commune. But when the battalion began to capture Etreham and then cross the Aure River on the southern shore, a major German resistance put an end to the American advance: companies tried all day to cross the opposing lines. On the evening of June 8, only one of them managed to cross the Aure: the Allies then decide to bomb Etreham during the night which is done by the destroyer USS Baldwin. Taking advantage of the darkness, part of the German soldiers of the 2nd Battalion of the Grenadier-Regiment 916 (352. Infanterie-Division) folded towards the south.

The next morning, June 9, 1944, the Americans renewed their offensive to seize Etreham without meeting this time of particular opposition: the battalion of Lieutenant-Colonel Corley crosses the Aure and continues its progression until the national road 13, delayed temporarily in this area by isolated enemy elements and making nearly 600 prisoners in the opposing ranks.

As early as June 10, 1944, the Americans began the installation of fuel tanks located east of Etréham, at the place of Mount Cauvin. These reservoirs are connected to pipelines from Sainte-Honorine-des-Pertes and Port-en-Bessin. The first deliveries were made on 16 June 1944 and the dismantling of the installations began on 10 October 1944. 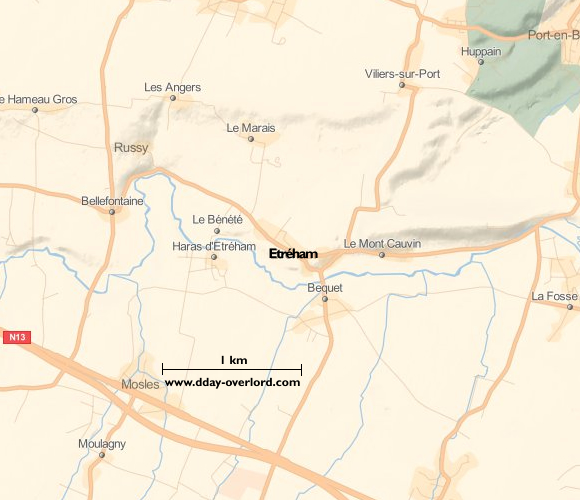