On August 15, 1944, the 90th Infantry Division was ordered to advance eastward in accordance with the XV Corps plan and to identify elements of the 5th Armored Division present in the area. Company C of the 359th Infantry Regiment (Colonel Robert L. Bacon) reached the outskirts of Exmes during the day. But the multiple German counter-attacks on the village of Bourg Saint-Léonard during the following days forced the 90th Infantry Division to reorganize its system: on August 17, the 2nd Battalion of the 358th Infantry Regiment (IR) commanded by Lieutenant-Colonel Christian H. Clarke, Jr takes a position in place of Company C of the 359th IR.

On August 19, 1944, the subgroup of Major Massu belonging to the 2nd French Armored Division (commanded by General Leclerc) was ordered to seize Exmes and then to proceed to the departmental road 13, East of Chambois. The commune of Exmes was liberated that same day and Colonel Langlade installed the command post of his battle group (GTL: Groupement Tactique de Langlade). 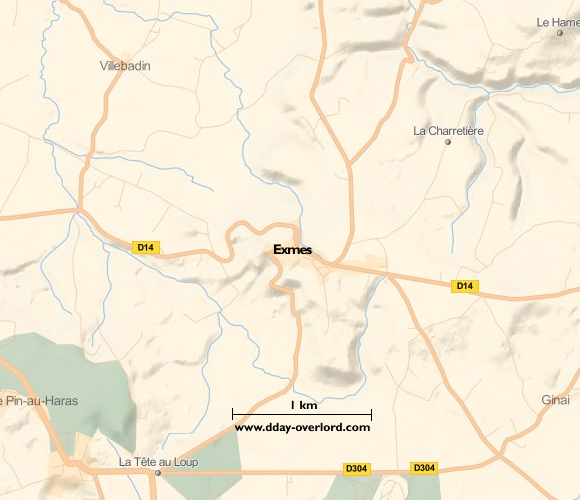