Fontenay-le-Marmion in 1944 – Calvados – Battle of Normandy

The commune of Fontenay-le-Marmion is located on a high point called crest of Verrieres and that overlooks the area between Caen and Falaise. Defended by elements of the 272. Infantry Division, the Allies plan to seize it as of 18 July 1944 with the launch of Operation Atlantic but German artillery put an end to the offensive. On 24 July 1944, the Allies launched Operation Spring to relaunch the action in the same area.

According to the plan of Operation Spring, the village of Fontenay-le-Marmion is to be reached in the second part of the night, after the German line of defense is exceeded. The Black Watch of Canada (5th Infantry Brigade, 2nd Infantry Division) is in charge of seizing it, supported by the Calgary Highlanders (5th Infantry Brigade) and B Squadron 6th Armored Regiment – 1st Hussars (2nd Armored Brigade).

The operation was launched on the evening of July 24 and Canadian troops progressed in the early hours of July 25. Delayed by the first line of German defense, they remain fixed on their starting base. The Black Watch regiment manages to cross the village of Saint-Martin-de-Fontenay despite losing its corps commander at this time, Lieutenant-Colonel Cantlie, killed by the firing of a machine gun. Major Griffin then took command and began the regiment’s progression into the open south, starting at 9:30 am: Canadians were caught in a particularly intense fire and no longer supported by the Calgary Highlanders in Saint -André-sur-Orne. Tanks of the Schwere Panzer-Abteilung 503 installed in Fontenay-le-Marmion add to the disorder by applying murderous fires. The Black Watch, however, is supported by B Company of the 1st Hussars and the 5th Field Guns Regiment. But of the 325 soldiers engaged, only about sixty reached the summit of the ridge, still led by Major Griffin. The survivors are nailed to the ground by machine gun fire and by the shells flying around them, they have no choice but to break contact and return to the starting point: they are no more than 15 to return alive, Griffin is missing.

A new offensive was launched at Fontenay-le-Marmion on the eve of July 26 by the 2nd Canadian infantry division commanded by General Simonds, but without results. The front line did not evolve for more than a week in spite of constant bombing, and it was not until the launch of Operation Totalize on August 7, 1944 that the Canadians of the Queen’s Own Cameron Highlanders of Canada (6th Infantry Brigade) Begin their offensive in the direction of Fontenay-le-Marmion. The Germans were unable to keep their line of defense and the village was freed by soldiers of company A of the Queen’s Own Cameron on the evening of August 8, when they were bombed during the night of August 7-8. As they progressed towards Fontenay, the Canadians discovered on the battlefield the body of Major Griffin, killed during the July 25 assault. 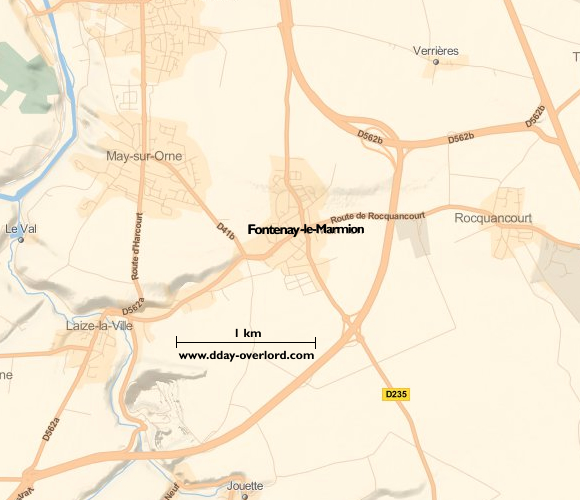