Fontenay-le-Pesnel in 1944 – Calvados – Battle of Normandy

After the disembarkation on D-Day, the S.S.-Panzergrenadierregiment 26 belonging to the 12th Panzer-Division Hitlerjugend moved to Fontenay-le-Pesnel from 7 June 1944 in the evening. It retains this position for 19 days.

On the flank of Operation Epsom, which begins on 25 June, the British set up Operation Martlet, also known as the “Dauntless”, according to the official march of the British Army. This maneuver is necessary because the Epsom – induced progression uncovers the right flank of the 8th Corps, particularly in the Rauray region: it is necessary for the Allies to seize several key points, Main action, namely the Epsom operation. These key points are mainly the villages of Fontenay-le-Pesnel, Rauray, Tessel, Brettevillette and Juvigny.

Operation Martlet begins on 25 June 1944 at dawn. Allied artillery opens fire from 04:15; Forty-five minutes later, the fire became rolling and progressed to the south, with the soldiers of the next 49th infantry division immediately.

The British division is progressing on two axes, the 146th infantry brigade with Rauray’s goal, the 147th Fontenay-le-Pesnel brigade.

The 11th Royal Scots Fusiliers of the 147th Brigade arrived at Fontenay-le-Pesnel, where fierce fighting took place on the morning of 25 June: the Germans of the 3rd SS Panzergrenadierregiment 26 belonging to the SS Panzer-Division Hitlerjugend repulsed their opponents to the northern suburbs of the village, and the duels of artillery added to the general disorder. The 7th Duke of Wellington’s Regiment reinforces at nightfall and seizes most of Fontenay before midnight.

It was not until dawn that the English finally seized Fontenay-le-Pesnel, pushing the Germans farther south towards Tessel and Rauray. 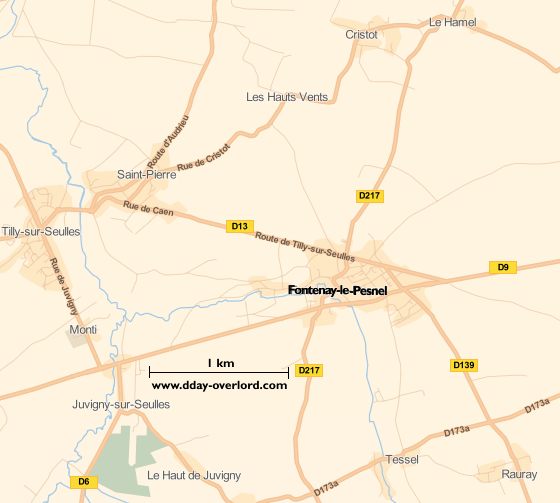