The small commune of Four is defended by elements of the 2nd SS Panzer-Grenadier-Regiment 2 battalion of the 1. SS Panzer-Division “Leibstandarte Adolf Hitler” and the Schwere SS Panzer-Abteilung 101. In accordance with the plan of the operation Goodwood, launched on July 18, 1944, is the 11th British Armored Division which is responsible for seizing it. The village is located on a very open ground, conducive to armored actions.

It is therefore the regiments of tanks which begin the progression in the lead after one of the most important aerial bombardments of all the Second World War in Europe. The high-tech units quickly recorded heavy losses as anti-tank batteries held up during the bombardment and surprised the British: they must quickly rethink their maneuver. Four is located between two German bolts, Bourguébus in the south-west and Cagny in the north-east: this village becomes an obligatory passage for the Allied units seeking to circumvent the German fortified positions.

The company F of the 8th Battalion The Rifle Brigade (29th Armored Brigade, 11th Armored Division) progressed late in the morning towards Four but the intervention of four tanks Panzer IV forces it to stop. The British invaded the 23rd Hussars squadron (29th Armored Brigade). The Sherman tanks succeeded in putting a Tiger tank on the outskirts of Cagny out of use, and when they were getting ready to enter Four, the Germans triggered A terrible deluge of fire from the village: 25 soldiers are killed and 32 others wounded in a few minutes. At 1445 hours, the Germans launched an armored raid with Panther tanks from the sector of Four but could not break through the front. Six of their tanks are lost during this violent action. At nightfall, the English did not succeed in seizing the village and they set themselves up for defense, waiting the next day to continue the offensive.

On July 19, 1944, the 7th Armored Division launched its attack starting at 17 hours after an imposing neutralization shot on its various objectives and in particular on the village of Four. This bombardment had the effect of forcing the withdrawal of the 2nd battalion of the SS Panzer-Grenadier-Regiment 2, from 3 pm. The 1st Royal Tank Regiment (22nd Armored Brigade) made its way to the village, where only a few German soldiers were left to investigate the enemy’s progress. After rapid fighting, the English seized Four and headed for La Hogue shortly before 6 pm. 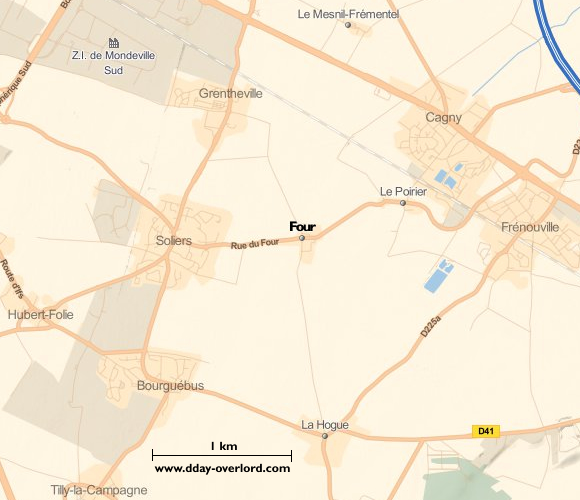