On June 6, 1944, while the Allied land forces were still far from Frénouville, a Typhoon fighter was shot down by the German anti-aircraft defense. Its pilot, the Australian Flying Officer Alfred Ernest Roberts, who is a member of the 164th Royal Australian Air Force Squadron, 136th Wing of the Royal Air Force’s 84th Group, is killed at the age of 26 and buried in the communal cemetery where his body still rests today.

After the disembarkation of Normandy, the Germans reorganized their defense around Caen and in mid-July 1944, the village of Frénouville was occupied by the 11th company of Stab III Batallion, Panzergrenadier-Regiment 125 (21 Panzer Division).

On July 18, the Allies launched Operation Goodwood, which aims to capture Caen. The offensive began with a massive bombardment that destroyed the vast majority of German positions. The commune of Frénouville is located in the area coded “M” by the allied aviation. The air attack, one of the most important of the Western European fights, destroyed many German positions and disrupted the defense line: 650 tons of bombs were dropped on the “M” sector. Only a few isolated units do not suffer damage. The Germans reorganized their equipment after the losses they had suffered and the 1st and 2nd squadrons of the Schwere Panzer-Abteilung 503 took up positions in the Frénouville sector. They were instructed to prohibit any crossing of the Frénouville-Vimont axis.

Meanwhile, the tanks of the 2nd Fife and Forfar Yeomanry (29th Armored Brigade of the 11th British Armored Division) begin their advance, bypass Cagny by the east around 9 am and reach the outskirts of Frénouville. Under the fire of the cannons commanded by Major von Luck commanding the Panzergrenadier-Regiment 125, they suffered very heavy losses and folded westward, installing themselves as a cover to allow the other units of the division to advance towards the South of Caen. At 2:45 pm, the Germans launched a counter-attack from Frénouville, directed towards the commune of Bras, south-east of Caen, to stop the assault of the British forces. Several Panther tanks face the 2nd Fife and Forfar Yeomanry and sow terror, but they are repulsed and six German tanks are destroyed.

On the night of 18-19 July, the 21. Panzer-Division was raised on position by the 12th Panzer-Division Hitlerjugend. The Allies also took advantage of the night to reorganize. It is the second battalion of the SS Panzer-Regiment 12 under the orders of the Sturmbannführer Arnold Jürgensen who settles in the area of ​​Frénouville in surveillance facing the west. All day of July 19, the fighting continues with great intensity, and a new armored attack is launched at 5 pm by Guards Armored Division from Four in direction of Frénouville. The men of Jürgensen were reinforced by the SS Panzergrenadier-Regiment 25 (Kampfgruppe Waldmüller) and the SS Panzer-Jäger-Abteilung 12 (commanded by the Standartenführer Jacob Hanreich): they succeeded in repelling the assault.

The fighting resumes on July 20th when many clouds bring rain and this time a new attack by the 5th Battalion Coldstream Guards (belonging to the 32nd Guards Brigade of the Guards Armored Division) manages to push back the Germans beyond Frénouville . The latter retreated towards Vimont. 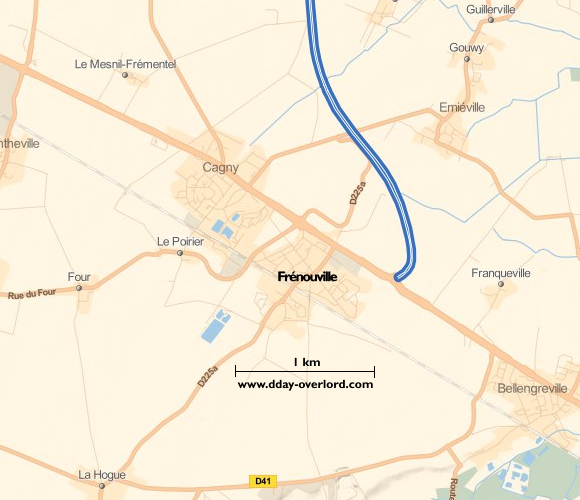