Fresville in 1944 – Manche – Battle of Normandy

On the night of June 7-8, 1944, the 8th Infantry Regiment of the 4th Infantry Division was established south of Neuville-au-Plain. Elements of Grenadier-Regiment 1058 (91. Infanterie-Division) are installed as a solid defense in the village.

These men engage in a very short-range battle and the losses are significant, on one side as well as the other. The Germans began to retreat in the early hours of 9 June, taking advantage of the darkness and the terrain compartmentalised by the imposing hedges. A group of paratroopers from Company I of the 505th Parachute Infantry Regiment, which bypasses Fresville by the southwest towards Grainville, is attacked by Germans who, with their MG 42 machine gun, kill three soldiers: Arthur S.Hile, Irving L. Jones and William A. Stephens.

At 1 am, the glidermen of the 325th GIR took possession of Fresville. They set up defensive positions for the night before resuming the progression towards the train station of Montebourg the following morning. 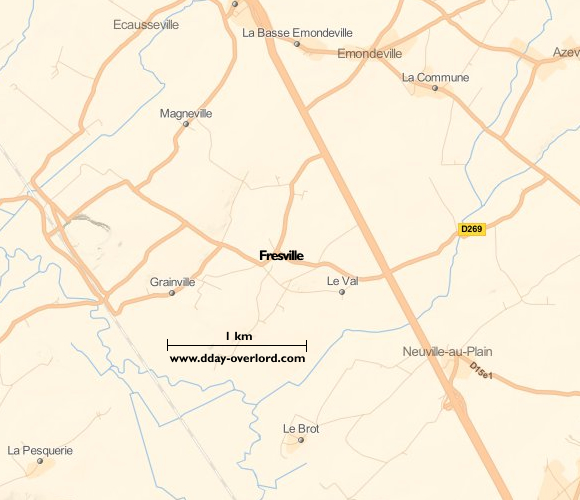