The town of Giberville in the Calvados is located northeast of Caen on a land movement dominating the region and before the Second World War knew an industrial development thanks to the establishment of the Société métallurgique de Normandie (Metallurgical Society of Normandy). Giberville is occupied by elements of the 8th company of the Oberleutnant Laber of the Panzergrenadier-Regiment 125 commanded by the Hauptmann (captain) Kuron and belonging to the 21. Panzer-Division.

The British of the 3rd Infantry Division must seize Giberville as early as June 6, but the long delay on the beach does not allow them to meet deadlines. The Germans took advantage of the situation and reinforced their line of defense on D-Day, especially with soldiers belonging to the Luftwaffen-Jäger Regiment 32 of the 16. Feld-Division (L). They are gradually reinforced by elements of the Schwere Panzer-Abteilung 503 equipped with the first tanks Tiger II deployed during the battle of Normandy. During the weeks that follow, the front does not evolve. Giberville was subjected to regular bombing and the Germans evacuated the village gradually in order to prepare its defense. They reinforce the village with the 2nd squadron of the Sturmgeschütz Abteilung 200 of the 21. Panzer-Division, equipped with self-propelled guns Marder I.

On 18 July, the Allies launched Operation Atlantic (Canadian part of Operation Goodwood) to capture Caen: the offensive began with a massive bombardment that destroyed the vast majority of German positions. Canadian soldiers from the Queen’s Own Rifles of Canada (8th Infantry Brigade) were forced to march along the town of Colombelles and its imposing metalworking factory, and then capture Giberville. The assault begins at 7:45 am. Company A at the command of Major Hume Elliot Dalton delivers furious fighting in the area of ​​the factory that companies C and D bypass the east. During the approach phase of the village, the men of the Queen’s Own Rifles are caught by machine-gun fire and all section leaders of company A are killed (Lieutenants Kenneth MacLeod, Gerald Douglas “Gerry” Rayner and James Rogerson “Jim” McNeily). The wounded were treated as best they could in the first houses damaged by the Canadian regiment. Company A is in charge of the western part of the village: the 9th section heads towards the railway line 400 meters further south, while the 7th and 8th sections dig the houses of Giberville. Major Dalton has recalled the 9th section because the General Staff orders a neutralization and blinding shot at the height of the railway line where Germans are gathered. Soldier Harry Henry “Buck” Hawkins, aged 39, is fatally hit by a machine gun fire at the break of contact.

The Queen’s Own Rifles of Canada regiment remained in Giberville until July 21, 1944 and consolidated its positions during this short period before resuming the advance. 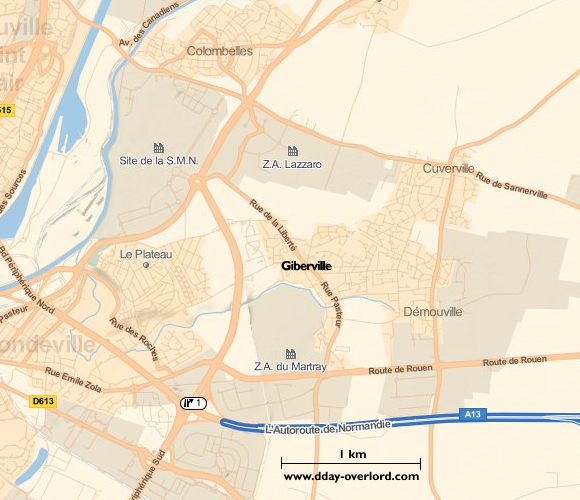