Grandcamp-Maisy in 1944 – Calvados – Battle of Normandy

On the night of June 5-6, 1944, the Allies launched a massive air raid over the Atlantic Wall, targeting the Maisy batteries. This raid is followed at dawn by the naval bombardment issued by the heavy cruiser HMS Hawkins. In spite of this deluge of bombs and shells, no major damage is detected on the batteries when the American soldiers begin disembarking on Utah and Omaha, the two nearest beaches. On the other hand, the armament of several strongpoints located by the sea near Grandcamp and Maisy is out of action. The battery was still active and HMS Hawkins resumed its daytime neutralization fire against fortified points Wn 83 And Wn 84 (also known as Stp 83 and Stp 84).

On June 8, 1944 at noon, US forces from Omaha Beach established a liaison with the survivors of the 2nd Ranger Battalion (29th Infantry Division) isolated since D-Day at Pointe du Hoc. General Bradley orders Colonel Rudder, commander of the 2nd and 5th Ranger Battalions, to meet the targets set before D-Day: he must seize Maisy’s support points. Rudder, wounded, knows that the second battalion is almost out of action. He then asks the fifth battalion to take charge of the assault. In the process, the 116th Infantry Regiment (IR) commanded by Colonel Charles D. W. Canham and the 5th Ranger Battalion of Lieutenant Colonel Max F. Schneider en route to Grandcamp. The access to Grandcamp along the coastal road does not allow bypass maneuvers: marshes border this axis to the north and south at the locality of the Pont du Hable. This bridge has not been destroyed by the Germans but it is beaten by fires by the Germans who are located in the west on a favorable point of the ground: in fact, the most eastern part of Grandcamp is located on a ground movement that dominates this flooded area.

The HMS Hawkins fired 113 shells on the German defense lines from 1455 to 1600 hours. The 5th Battalion Rangers failed to infiltrate the opposing position. The 3rd Battalion of the 116th IR commanded by Lieutenant-Colonel Lawrence E. Meeks took over, supported by the Sherman tanks of C Company, 743rd Tank Battalion. The tanks lead the advance, but one of the Sherman is put out of use by striking a mine near the Hable bridge. The bulk of the German resistance is located at the point of support Wn 78, on the eastern heights of Grandcamp, while precision shooters open fire from the dwellings. Benefiting from the support of small arms and tanks, companies K and L managed to cross the Hable bridge and deployed on both sides of the road, Company K of Captain William G. Pingley, Jr. to the north and Captain Charles W. East Company L to the south.

On his own initiative, Technical-Sergeant Frank Peregory is moving towards the German fortified site despite heavy fire. Having reached the summit of the hill, he discovered the entrance of a network of trenches which leads to the center of the point of support prohibiting the entrance of the village, located two hundred meters away. Without hesitating for a second, it enters the main trench and progresses inside while being crouched. Suddenly, he encounters a group of enemy infantrymen and without losing time he loads the Germans with the bayonet and throwing grenades. In total, Frank Peregory alone obtains the surrender of nearly forty enemy soldiers and thanks to his action he allows the men of his unit to liberate the village of Grandcamp while recovering the formidable German machine guns (for this victorious and heroic action, Peregory was posthumously decorated on June 14, 1944 with the highest US military honor, the Medal of Honor. Captain Jack Flora’s company I is able to carry out the reconnaissance of Grandcamp: the section of the 2nd Lieutenant Norvin Nathan progresses to the western end of the village, seizing in particular the point of support Wn 79 defending the access to the port . This day of fighting in Grandcamp is, in the opinion of the soldiers who participated in it, more difficult and even more violent than the landing at Omaha Beach.

Meanwhile, the 1st battalion of the 116th IR illuminated by the tanks of Squadron C of the 743rd Tank Battalion bypasses Grandcamp from the south and heads towards Maisy. The tanks arrive in view of the battery in the early evening but are attacked by mortars and guns of 88 mm adverse. The Sherman being short of fuel, the 1st battalion settles in defensive for the night.

In the morning of June 9, 1944, three companies of the 5th Ranger Battalion were engaged in the action, supported by two half-tracks of the 2nd Ranger Battalion (armed with 75 mm guns) and battery B of the 81st Chemical Mortar Battalion with 107 mm mortars). The Rangers also have four 81 mm mortars. After the neutralization shot by the 58th Armored Field Artillery Battalion, the Americans launched an assault at 9 am on the extensive site on nearly 44 hectares (more than 108 acres). According to the testimonies of the veterans, the combats are of extraordinary intensity. The network of trenches is so complex that the Americans get lost several times, adding to the disorder of the battle and causing friendly fire. After five hours of fighting, the battery was stormed, but the 155 mm guns were no longer there: they had previously been withdrawn by the Germans.

In the wake of the capture of Maisy and its batteries, the Americans progressed towards Gefosse-Fontenay and Isigny-sur-Mer.

On 14 June, General de Gaulle crossed the village of Grandcamp-les-Bains and addressed the population as part of a flash tour. 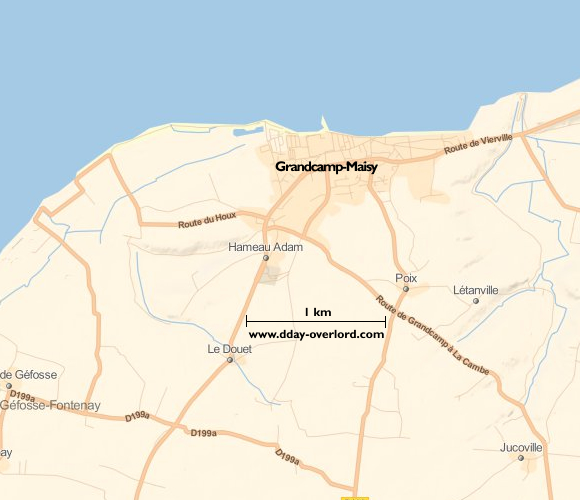