The Graye-sur-Mer beach is defended by the coded support point Wn 31. It is used as a command post of the 7th company of the 736th Infantry Regiment (716. Infanterie-Division) and includes a H666 bell-shaped observation at the top of the dune, a command post shelter and a H612 casemate for a 75 mm gun.

The 3rd Infantry Division’s 7th Brigade is landing on D-Day at Juno Beach on the Mike and Nan Green beaches between Graye-sur-Mer and Courseulles-sur-Mer. The assault is preceded, as on the other beaches of the invasion, by an aerial bombardment and then by a naval bombardment two hours before the beginning of the landing which is planned for 7.35 am. But at the dawn of the 6 June 1944, the sea in front of Juno is extremely stormy and the Royal Winnipeg Rifles (7th Brigade) disembarks ten minutes behind schedule.

Pinned down by shots from the WN 31 strongpoint, Canadians suffered very heavy losses, especially as they were targeted by German artillerymen and the swell returned many landing craft. The landing of the 1st Bn Canadian Scottish Regiment (7th Brigade) starting at 8:05 am does not change the situation which is becoming increasingly critical. The fights are extremely violent and sometimes end in melee.

The landing of the amphibious amphibious tanks of the 6th Canadian Armored Regiment (1st Hussars) increases the firepower of Canadians while reversing the balance of power. Rushed, the Germans retreated or were killed at their posts. Companies A and C of the Royal Winnipeg Rifles manage to capture Graye-sur-Mer in the early afternoon. 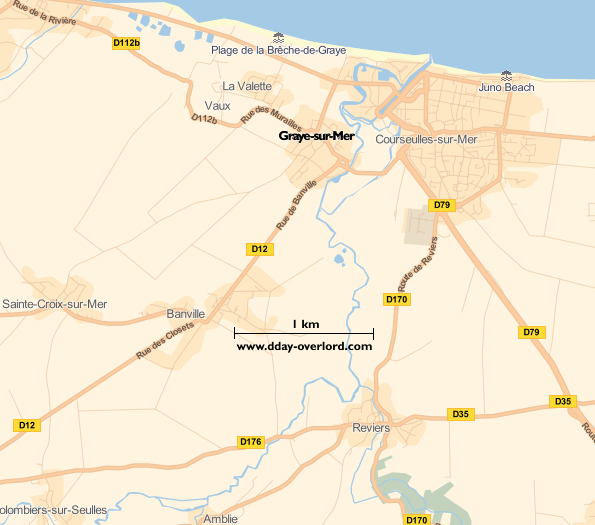