Grentheville In 1944 – Calvados – Battle of Normandy

The municipality of Grentheville is defended by elements of the 1. SS Panzer-Division “Leibstandarte Adolf Hitler”. In accordance with the plan of Operation Goodwood, launched on July 18, 1944, it was the 11th British Armored Division that was responsible for seizing it. The village is located on a very open ground, conducive to armored actions.

The assault is preceded by one of the largest air bombardments of the entire World War II in Europe: Grentheville belongs to the bombing sector coded “P” by the Allied air forces. This prelude to the earthly attack forces the Germans to reorganize as best they can, especially in this village where several artillery batteries and especially the Nebelwerfer gather. At the dawn of 18 July, the 3rd Royal Tank Regiment (29th Armored Brigade) was at the forefront of the attack: but without infantry, this unit could not recognize and search the village. The 3rd RTR thus bypasses Grentheville and its defenders who open fire on the English columns.

The village is then taken by assault by the second rung, namely here elements of the 5th Royal Tank Regiment (22nd Armored Brigade, 7th Armored Division), and this throughout the day. It was not until about 3 o’clock that the third battery of the Sturmgeschütz-Brigade (Feld) 200 fell in the direction of Soliers, leaving the British regiment to seize Grentheville.

On the night of 18-19 July, Grentheville served as a rallying point for the 23rd Hussars (29th Armored Brigade), hard hit by the fighting of the previous day. On July 19, the village was occupied by the 2nd Fife and Forfar Yeomanry (29th Armored Brigade), which was in reserve for the benefit of the other regiments of the brigade. 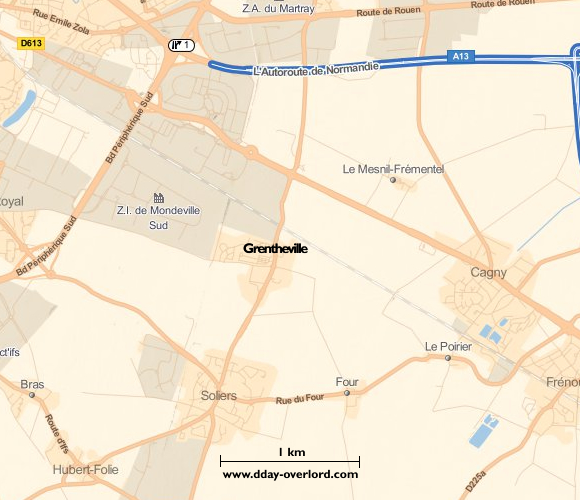