The municipality of Hubert-Folie is located to the northeast of an area called Verrières ridge that overlooks the area between Caen and Falaise. It is defended by elements of the 272. Infantry Division. In accordance with the plan of Operation Goodwood, launched on July 18, 1944, it was the 11th British Armored Division which was entrusted with taking a foot north of the ridge of Verrière and seizing Hubert-Folie.

The armored regiments began their progression after one of the largest air bombardments of the whole World War II in Europe and they arrive near Hubert-Folie in the late morning after having recorded very heavy losses. The reconnaissance section on Lieutenant Stileman’s Universal Carrier belonging to the 8th Battalion The Rifle Brigade (29th Armored Brigade) penetrates Hubert-Folie without encountering the enemy, but the Germans, A formidable battery of 88 mm guns, were ordered to open the fire only at the last moment in order not to reveal their positions. Unfortunately, the tanks of the 3rd Royal Tank Regiment (29th Armored Brigade) do not anticipate the new danger that awaits them and are committed to Hubert-Folie: at 11 am the Germans then trigger a terrible deluge of fire, Steel on the British. In a few minutes, the 3rd RTR loses 11 of its tanks and stops its progress, less than a kilometer to the north of the village. The regiment settles down as best they can, and it is the turn of the 8th Battalion The Rifle Brigade to take the rest of the offensive, but they are fixed in their turn by the soldiers defending Hubert-Folie: Then set up in defensive for the night, reorganizing for a new attack.

On July 19, 1944, at dawn, the company G of the 8th Battalion The Rifle Brigade set out to assault the village, supported this time by tanks of 2nd Fife and Forfar Yeomanry (29th Armored Brigade). But the German soldiers, reinforced by elements of the SS Panzer-Division “Leibstandarte Adolf Hitler”, stand firm and stop once again the English offensive. However, they are tested by the fighting and the bombardments which have not stopped and all the reserves are engaged: they withdraw in favor of the night, which allows the 4th battalion The King’s Shropshire Light Infantry (159th Infantry Brigade) To recognize and then seize Hubert-Folie in the night.

The Germans launched furious attacks against the village until 21 July and it was not until the launch of Operation Spring on the night of 24-25 July that Hubert-Folie was definitely out of the reach of the 1. SS Panzer- Division. 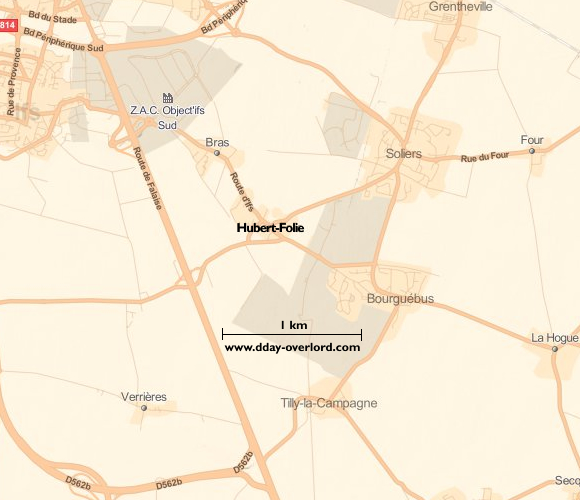