On July 24, 1944, the Americans launched Operation Cobra to pierce the front line south of Cotentin: 1,600 bombers of the 8th U.S. Air Force are engaged and the launch of the ground offensive begins the next day. On July 25, at 9:40 am, a new air raid was launched with the release of 3,300 tons of bombs and by 11 am the ground units launched an assault. The village of La Chapelle-en-Juger, located in the heart of the bombing area, is particularly affected. Slowed by an unexpected German defense given the amount of bombs fired in the area, Americans of the 4th Infantry Division commanded by Major General Raymond O. Barton fought violent fights against elements of the Panzer Lehr Division and the 275 Infantry Division.

The 8th Infantry Regiment (IR) commanded by Colonel James S. Rodwell reached the eastern outskirts of La Chapelle-en-Juger at dusk. The Americans, delayed by several resistance nests, decide to settle in defensive for the night at this place but the 2nd battalion of Lieutenant-Colonel Carlton O. MacNeely discovers in an orchard dozens of infantry and armored enemies. The struggle began with the reinforcement of 18 tanks two hours later but the Germans, although totally disorganized by the events, continue to defend with fierceness each hedge and each orchard and manage to stop their opponents. The American artillery is engaged in support to put an end to the German reinforcement and the 8th IR receives the order to seize La Chapelle-en-Juger. However, the American shells put an end to the advance of the men of Rodwell who fear to be victims of fratricidal shots. The attack was postponed until the following morning, but several patrols were responsible for informing the enemy’s device during the night in the village.

At the first gleams of July 26, 1944, the 8th IR captured La Chapelle-en-Juger and finally rejected the last German defenders belonging to the 353 Infantry Division. 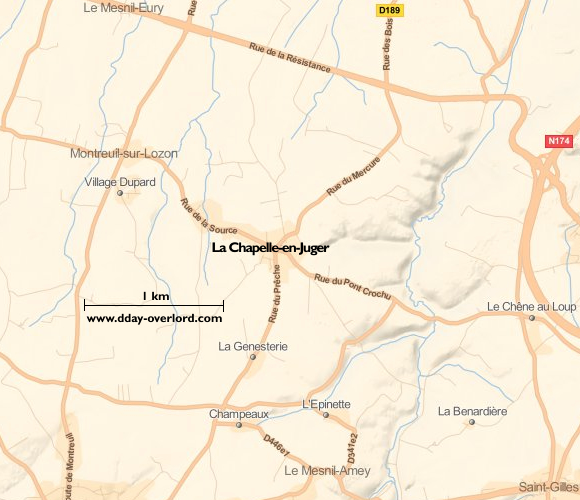