At the beginning of July 1944, the Germans retreated on a new line of defense north of Saint-Lô, turning all the communes into real fortresses. This is the case for the village of La Meauffe, defended by elements of the 352. Infanterie-Division as well as by the Kampfgruppe Kentner (composed of units of the Grenadier-Regiment 897 and Grenadier-Regiment 897 of the 266. Infantry -Division) entrenched in strong defensive positions. On July 10, the Americans of the 30th Infantry Division reached the northern outskirts of La Meauffe despite the constant bombardments of the enemy artillery during their advance. In the evening, the 35th Infantry Division freshly landed in Normandy and commanded by Major General Paul W. Baade comes to take position on the front line to restart the action the next morning.

Thus on July 11, 1944 at 6 am the 137th Infantry Regiment (35th Infantry Division) commanded by Colonel Grant Layng began its advance along the departmental road 54 after a major artillery preparation on the German positions in the area of ​​La Meauffe and on the banks of the Vire river. The first houses were attacked and the Germans defended each house with the same aggressiveness: the 137th Infantry Regiment (IR) can only maintain its advance by the systematic use of artillery to reduce each opposing resistance. The losses are very high and the Americans nickname the road to La Meauffe the “Death Valley Road” (road of the valley of the death). The bell tower of the church is occupied by the Germans who installed a position of heavy machine gun that sweeps the area of ​​its fires. They also fortified the castle of Saint-Gilles and the Americans fail to seize it. During these engagements, the corps commander of the 137th IR was wounded by a burst of machine-gun fire. Lieutenant-Colonel John N. Wilson commanding the 219th Field Artillery Battalion and Captain John R. Kerr, the artillery liaison officer, were killed. The 35th Infantry Division, Brigadier-General Edmund B. Sebree, is temporarily in command of the regiment until the arrival of Colonel Harold R. Emery. On this first day of engagement, the 137th IR recorded the loss of 12 killed, 96 wounded and 18 missing.

On July 12, 1944, the battle resumed with the engagement of the 654th Tank Destroyer Battalion alongside the 35th Reconnaissance Troop: the 1st battalion of the 137th IR managed to control La Meauffe at 1045 hours but the fighting continued throughout the ‘afternoon. The Chateau Saint-Gilles fell at the hands of the Americans at 14 hours and the Germans folded back once nightfall, supported by their artillery, abandoning definitively the village of La Meauffe. On this second and final day of battle for the release of La Meauffe, the 137th IR records the loss of 7 killed, 74 wounded and 7 missing. 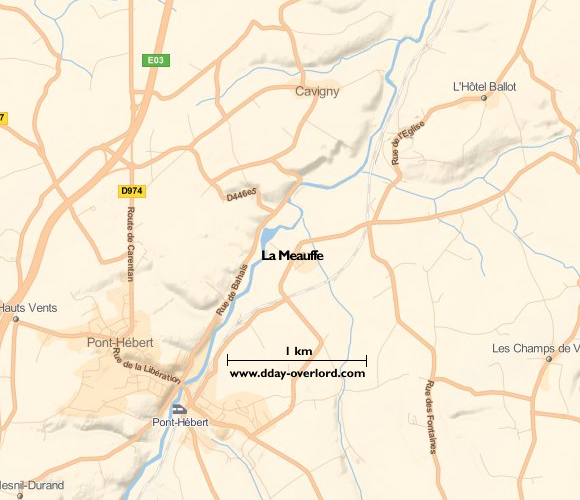