While part of Major General Wade H. Haislip’s American Corps marks a halt south of Argentan as of August 12, 1944, the Americans reorganize their forces in the area: in order to remove any threat of attack on their territory, they decide to maintain the pressure and attack east. On 13 August, elements of the 5th Armored Division reached the village of Bourg Saint-Léonard, which was held by elements of the SS Panzer-Division “Das Reich”. Repulsed, the Germans multiplied immediately the artillery fire on the commune. This municipality is a key point in the area as it offers important views of the Dives valley in the northeast.

On August 15, the 90th Infantry Division was ordered to advance eastward in accordance with the XV Corps plan. Company A of the 359th Infantry Regiment (commanded by Colonel Robert L. Bacon) took a position in Le Bourg Saint-Léonard, raising the armored vehicles of the 5th Armored Division. One section faces the Grande Gouffern forest to the west, another is located in the northern part on either side of the departmental road 16 which connects Le Bourg Saint-Léonard to Chambois. A third section is held in reserve at the crossroads of the Moon, south-east of the village.

On the morning of 16 August 1944, the Germans of SS Panzergrenadier Regiment 3 of the SS Panzer-Division “Das Reich”, reinforced by elements of the second Panzer-Regiment 16 (116. Panzer-Division) In order to resume the village and cover the retreat of the 110,000 soldiers still trapped in the trap which must close at the height of Chambois. Along the edge of the Grande Gouffern forest, they make contact with the American soldiers of company A who immediately retreat to the village. The Germans attacked in the afternoon from the north and quickly submerged the first opposing positions, quickly reaching the southern limit of the municipality. Major Leroy H. Ponds, commander of the 1st Battalion of the 359th Infantry Regiment, has to reorganize his unit as soon as possible in order to face the pressure of his enemies and calls in particular Company B which is moving towards the south of the village. Company A, pushed back to the south-east, counter-attack in turn towards the north of Bour Saint-Léonard. The Germans, although they managed to maintain themselves in the south-west of the village, retreated from the northern part which was taken over by company A.

In the early evening, the 10th company of the SS-Panzergrenadier Regiment 3 bypassed the village by the west and attacked the positions of company B, exploiting their strong point of the sector and beginning a maneuver encircling their opponents. In order to avoid the catastrophe, Major Ponds orders a withdrawal of his men towards the southeast towards the place of La Lune. He reorganized his companies and relaunched the assault with company B progressing along the road La Lune-Bourg Saint-Léonard while company A was moving parallel to the south from the place called La Houellerie. At nightfall, the first battalion of the 359th Infantry Regiment infiltrated the southern part of the village but failed to gain a foothold further north, the area being firmly defended by the Germans. Both sides keep these positions for the night while a heavy rain falls on the region. This violent German offensive marks the American General Staff: the general officers did not expect their opponents to be able to conduct such an operation at this stage of the Battle of Normandy, since the German Army is Almost completely trapped.

On the following day, August 17, the Germans renewed their offensive towards the south of Bourg Saint-Léonard, supported by several platoons of tanks. They once again bypass the village by the west, in particular to exploit to the maximum the capacities of their tanks. While they are on the brink of collapse and the commander of Unit B, Captain Hutchens, is killed, the American Sherman tanks reverse the situation and prevent their opponents from taking over the entire village. Major Ponds launches a new counter-offensive in the early afternoon, supported by the tanks of the 773rd Tank Destroyer Battalion, and the Germans gradually retreat to the north. At the same time, the SS Panzer-Division “Das Reich” was ordered to break the contact and leave the Falaise pocket before it closed. It is to be relieved on position in the early evening by the last elements of the 116. Panzer-Division still present in the area: it is about 80 soldiers of a reconnaissance battalion which, by themselves, are not Not able to withstand the three companies of the 359th Infantry Regiment.

Despite their small numbers, the Germans still resisted until August 20, 1944 before definitively withdrawing from the enemy fire power, leaving Le Bourg Saint-Léonard to the Americans. Their departure rhymes with barrage of artillery, continuing the destruction of the dwellings of the village. But this one is definitively released.

Photo of Bourg Saint-Léonard in 1944

An anti-tank M5 in battery at the foot of a ruined building of Bourg Saint-Léonard. Photo: US National archives. 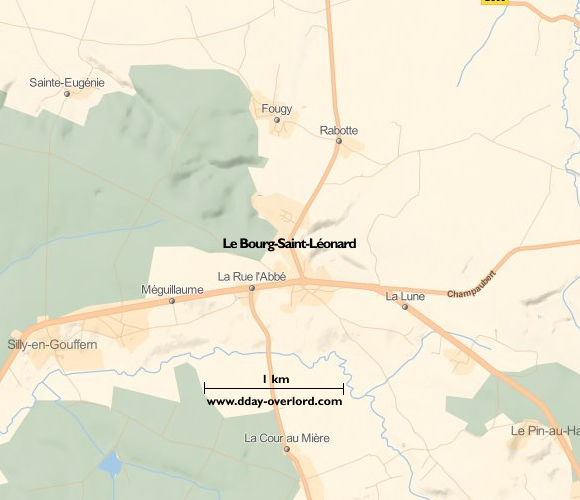