The commune of Le Fresne-Camilly is occupied in 1944 by soldiers belonging to the second battalion Grenadier-Regiment 736 (716. Infantry Division).

On June 6, 1944, the Fresne-Camilly area is one of the objectives of the Canadians of the Regina Rifles Regiment (7th Infantry Brigade). The town is located on an imaginary line called “Elm” by the Allies, marking a line of goals.

At 6 pm, Company B was ordered to seize the commune of Fontaine-Henry with the support of a tank squadron while Company C had to continue in the direction of Le Fresne-Camilly. Major C. S. T. Tubb, commander of Company C, bypasses Fontaine-Henry and progresses towards his objective, also supported by tanks. But at 18:30, a German 88 mm gun located at Le Fresne-Camilly opened fire on Canadian armored vehicles: six were destroyed.

Benefiting from support fire from several Centaur tanks in position at Reviers and equipped with a 95 mm howitzer, Canadian soldiers regain the advantage. At 7 pm, company C seized the town of Le Fresne-Camilly. The line “Elm” is reached. Company D reinforces the position of the regiment that settles there for the night from 21 hours.

The Royal Engineers 23rd Airfield Construction Group builds from June 10, 1944 an aerodrome called ALG B-05 northeast of Fresne-Camilly which is operational on June 13th. It remains under the fire of the German artillery from the first day of its construction until 19 July 1944, when the commune of Colombelles falls into the hands of the Allies. German artillery observers were stationed throughout this period in the ruins of the steelworks, offering a general view of the Caen region.

Pictures of Le Fresne-Camilly in 1944:

Ernie Hulstone of the Royal Air Force is washing his feet near a 40mm Bofors anti-aircraft gun on the airfield ALG B-05 of Le Fresne-Camilly. Photo: IWM. 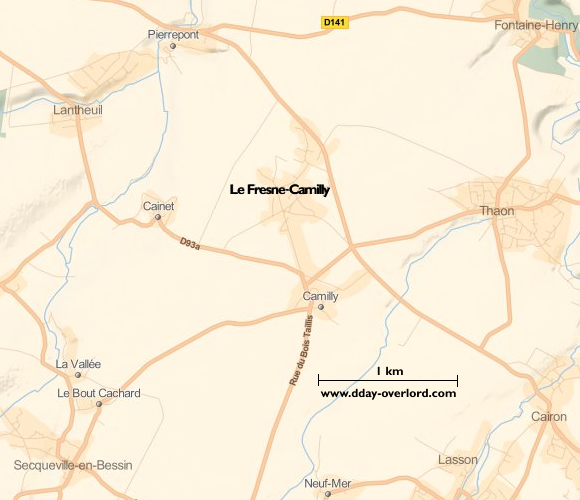