In the spring of 1944, the Droueries hamlet was occupied by soldiers belonging to the third battalion of Grenadier-Regiment 1058 (91. Infanterie Division). This small town is located about 500 meters east of Saint-Côme-du-Mont. The initial plans provided for the 2nd Battalion of the 501st Parachute Infantry Regiment (101st Airborne Division) under the command of Lieutenant-Colonel Robert A. Ballard to seize the hamlet of Les Droueries in the early hours of D-Day. Its seizure would allow the fall of Saint-Côme-du-Mont.

On June 6, 1944, Lieutenant-Colonel Robert A. Ballard commanding the 2nd Battalion of the 501st PIR was more lucky than his comrades in the 101st Airborne Division during the parachute phase as he was dropped almost to the point planned. It regroups a hundred parachutists and starts the progression towards the Droueries from 5.30 am: Companies E and F form two columns (“Easy” on the right flank, “Fox” on the left flank), the company D is in support of the company F. The objective of the company E is the northern crossroads of the Droueries, while that of the company F is the crossroads south. In total, this force is armed with a bazooka, a mortar of 60 mm, four machine-guns and 125 rifles. When they reach the outskirts of a farm at Les Droueries, they are taken to task and immediately retaliate, demanding the support of their artillery. The Americans are set by German shots and are unable to overcome this point of resistance. The position held by the Germans is ideal: it dominates the area and allows them to apply fires both on the line of contact and on the rear of the paratroopers of the 501st PIR, which prevents their opponents from falling back.

To the south of the hamlet of Les Droueries is the hamlet of Basse-Addeville, which is attacked by about fifty paratroopers of different battalions commanded by Major Richard J. Allen, S-3 officer (command operations staff) of the regiment. Once again, the Germans are holding on and fixing the Americans who are unable to maneuver so much fire is intense. The paratroopers remain covered in trenches, along the hedges.

The noise of the fighting around the hamlet of the Droueries attracted many parachutists who were lost in the marshes and who swell the ranks of Lieutenant-Colonel Ballard. Among these reinforcements were Lieutenant Walter W. Wood (1st Battalion, 501st PIR), who accompanied shortly after 8 hours a score of paratroopers belonging essentially to the 506th PIR. Ballard gives the order to this handful of man to realize an overflow in all discretion by the north: Wood starts and goes along several hedges before arriving at the height of the northern crossroads. Before launching the assault on the intersection and the surrounding houses, Ballard set off a firing shot by company E: Lieutenant George E. Schmidt, galvanizing his men during this phase, was killed and four paratroopers from the “Easy” are injured. Lieutenant Vern Merz took command of Company E. Lieutenant Wood’s men stormed the intersection and seized it, as well as a house located at the crossroads. The Germans counterattack but are repelled by bursts of machine guns and explosions of grenades.

At the end of the morning, Ballard considers that his forces are insufficient to hold the sector and that he risks being overwhelmed by the opponent if he stays longer at the northern crossroads of Droueries. He ordered his men to retire to Angoville-au-Plain. He wants to reach Saint-Côme-du-Mont by skirting the Droueries crossing the marshes to the southeast. Ballard was reinforced by Lieutenant Denver R. Bennett of Company D and by six paratroopers. He immediately places it at the head of the device and begins the progression through the swamp: the German machine guns located at the Droueries fix again the Americans. Lieutenant-Colonel Ballard quickly realized that he could not go through the marsh at the risk of too severe losses. One of his patrols detects a hollow path along the marsh which could allow the parachutists to progress between the Droueries and Basse-Addeville: the Americans, reinforced by Captain Brown and 45 infantrymen, commit themselves from 1445 hours. When they are about 300 meters away from the southern crossroads of the Droueries, Ballard and his men are again set by German shots. The 60 mm mortar consumes its last shells without any effect on the opponent. The Americans, who have suffered further losses, remain under cover until nightfall: Ballard sent patrols around midnight to collect ammunition and supplies on the jump zone in the Angoville-au- Plain. They are back at around three in the morning with enough to hold an extra day.

At 4:30 in the morning, on June 7, 1944, after a relatively quiet night during which the soldiers could rest alternately, Lieutenant-Colonel Ballard ordered the alert of his men. German patrols tested the American device, both frontally and on the flanks: in spite of the shots, they continued their reconnaissance of the ground, supported by their mortars which opened fire in salvos of 6 to 8 shells. At 6:30 am, Ballard ordered his men to relaunch the offensive, using the terrain to advance. Despite the constant and deadly shooting of four German machine guns, the Americans advance by crawling, meter by meter.

In the early hours of the afternoon, Ballard managed to radio Lieutenant-Colonel Harry WO Kinnard, Commanding Officer Operations (S-3) of the 501st PIR, who was at that time in Angoville-au-Plain with Colonel Robert Sink, head of the 506th PIR. He asked him to fire an artillery fire at a building in Les Droueries (which he believed could house an enemy’s forward command post) and along the hedges to the south of the dwellings. The request is transferred to the heavy cruiser USS Quincy positioned off Utah Beach which opens fire on the coordinates sent by Ballard. But because of the artillery fire in the area, it is very difficult to make the corrections and it is only after 45 minutes that the 203 mm Quincy shells reach the area of ​​interest to the paratroopers of the area. 501st PIR: Ballard asks for efficiency and gets three successive bursts of twelve shells. A new efficiency is required, but this time falls on the positions of the company F: 5 paras are killed, 8 seriously injured. Panic wins the Americans and Ballard runs to stop three of his men abandoning their position: the corps commander passes corrections for the Quincy and demands a new salvo.

At the same time, Ballard was ordered by radio to leave his battalion in position and to go personally to Angoville-au-Plain where he was summoned by Brigadier General Anthony C. McAuliffe, commanding the 101st Divisional Artillery. When Ballard sets out, the Germans counter-attack 200 meters south of his position through the marshes: they are caught by the parachutists who stop the offensive. Arrived at the rendezvous point, Ballard informs his superiors about the enemy positions in front of him. He was ordered to continue the attack in the direction of Les Droueries with the reinforcement of six Sherman tanks. Back on the line of contact, a plan of attack is quickly established: the airborne troops must advance along with the tanks that concentrate their shots on the positions of the four German machine guns detected. The presence of tanks increases the morale of the infantrymen who begin the progression: the tanks each consume 10 75 mm shells and 15 boxes of machine gun ammunition during the approach phase. The impact on the opponent is obvious: half breaks contact and folds, while others surrender. But the Americans, exhausted by these murderous fights, do not make prisoners and systematically defeat the Germans who present themselves to them. Company E, on the left flank, reached the crossroads to the south and was taken to task from the building which the Americans had captured the day before. During the attack, company F, still under the shock of the fratricidal naval artillery fire, was replaced by a small detachment commanded by Major Raymond V. Bottomly, second in command of the 501st PIR, and composed of the paratroopers of Lieutenant Wood And a group of 15 paratroopers led by Lieutenant Richard Snodgrass of company D. The assault continues and the men are at very short distance from one another: gradually, the German defense breaks. Bottomly made 8 prisoners and captured 15 machine guns; He lost 10 of his men (4 killed and 6 wounded).

The Americans finally hold the Droueries at nightfall. The tanks folded and the paratroopers set up in defense, supplemented in food and refueling from 19.30. Company F, reduced to 16 personnel, is placed to the north of the hamlet to secure the right flank of the American line . 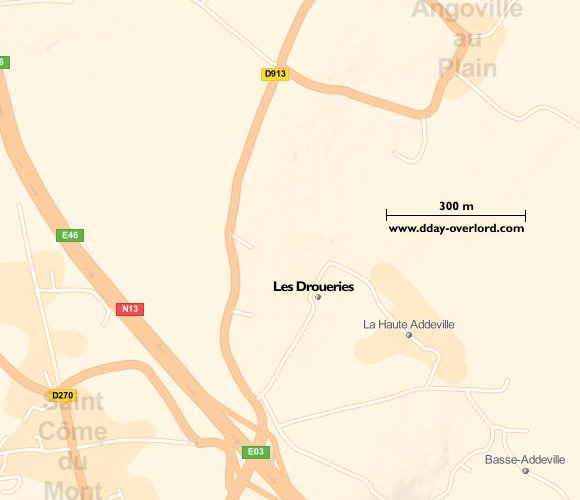