Les-Dunes-de-Varreville in 1944 – Manche – Battle of Normandy

In the spring of 1944, the hamlet of the Dunes-de-Varreville was occupied by the 1st Battalion of the Grenadier-Regiment 919 (709 Infantry Division), commanded by Hauptmann (captain) Fink. It is protected to the north by the German Wn 10 strongpoint (also known as Wn 101) which consists of a 88 mm gun reinforced by two 47 mm guns flanked by a casemate, the orientation of which makes it possible to fire to both the north and the south of the beach. In addition to these artillery guns, the site also includes two 50 mm gun shells, a third 47 mm gun in an open fire position and two tank turrets each with a 37 mm Concrete shelter Tobruk. Close protection of the site is ensured by two 81.4 mm mortars, 12 automatic flame-throwers distributed around the Wn 10 and 10 concreted Tobruk positions for machine guns. Four observation posts are also constructed as well as ammunition shelters and bunkers.

To the east of the hamlet, the Germans constructed the Stp 9 strongpoint (also known as Wn 100), which consists of two 88 mm guns under a casemate that also runs along the entire beach. In addition to these two rooms, there are five tank turrets, each equipped with a 37 mm gun on a Tobruk concrete shelter (three along the beach and two behind the device) and a 150 cm projector protected by a Concrete shelter. A 50 mm M19 mortar is installed under a shielded bell on a H633 type shelter and four concreted positions for machine guns ensure close protection of the fulcrum.

In 1944, Les-Dunes-de-Varreville is located at the end of a departmental road 423, connecting the beach inland by crossing the marshes.

On June 6, 1944, at 6:30 am, the first wave of assault by American troops landed 600 meters southeast of the hamlet of La Madeleine on the area known as “Utah Beach”, 2,500 meters too far south of the initial plans. Nevertheless, after the fighting for the beach, the units regroup and starting at 9 o’clock, they go towards the objectives in the interior. This is the case for the 3rd Battalion of the 22nd Infantry Regiment (4th Infantry Division) under the command of Lieutenant-Colonel Arthur S. Teague, temporarily under the command of the 8th Infantry Regiment, progressing north towards Quinéville to ensure The control of the different points of support along the beach. This mission is particularly important insofar as the first wave of assault landed too far south: reinforcements could possibly land on the area originally planned, without it being recognized. The Americans must be quick to deal with any eventuality. The infantry are supported by the Sherman tanks of the 1st platoon of Company A of the 746th Tank Battalion, commanded by 2nd Lieutenant Clyde E. Tanner.

The 1st Battalion of the Grenadier-Regiment 919 offers a fierce resistance at the height of Stp 9 and manages to pin down the Americans. A tank is lost, hit by the explosion of a mine and by a direct shot of anti-tank gun. The Sherman shells have no effect on the opposing concreted positions and the Allied navy is in action. This intervention is salutary and forces the Germans to retreat, leaving the way for the soldiers and armored vehicles freshly disembarked and the Americans thus seize the Dunes-de-Varreville. At nightfall, the platoon of 2nd Lieutenant Clyde E. Tanner set up his bivouac north of the Dunes-de-Varreville.

On August 1, 1944, the 2nd Armored Division of the Free France forces, commanded by General Leclerc, landed on the Dunes-de-Varreville beach to participate in the liberation of Europe. 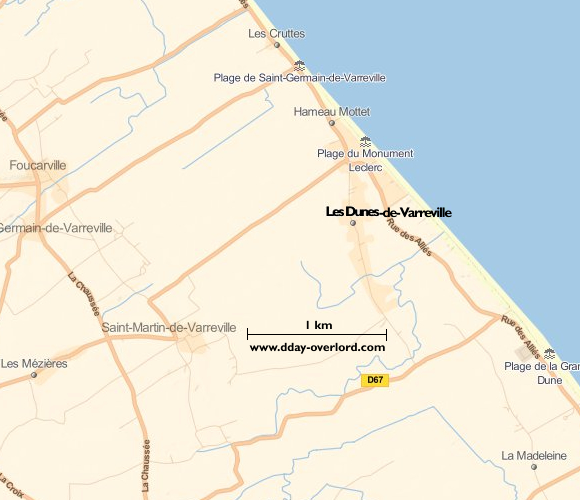