The village of Les Forges was occupied in the spring of 1944 by German soldiers of the 3rd Battalion of the Grenadier-Regiment 1058 (91. Infanterie Division). It is located at the geographic center of the assault areas of the two American airborne divisions. The Allies thus define Les Forges as a laying area for the glider refueling which is scheduled to start on D-Day at 9 pm (Operation Elmira): this landing zone (LZ) coded “W” and it extends over two kilometers in length and one and a half kilometers in width. Unlike the glider landing zones of the 6th Airborne Division northeast of Caen, LZ “W” is very compartmentalized in several orchards and fields bordered by high hedges as well as by lines of trees sometimes reaching fifteen meters height.

In the middle of the afternoon on D-Day, the American soldiers of the 8th Infantry Regiment (4th Infantry Division) commanded by Colonel James A. Van Fleet reached National Road 13 and secured the village of Les Forges. They are accompanied by elements of the 82nd Airborne Division who landed on Utah in the morning and commanded by Colonel Edson D. Raff. The Germans, who had concentrated their resistance on Fauville’s field movement, stood firm and forbade any advance on the national road which they swept under the fire of their guns. Time is of the essence: the Americans must absolutely neutralize this threat which threatens the arrival of glider reinforcements on the LZ W which is still within range of their opponents. Meanwhile, Company G of the 8th Infantry Regiment secured National Highway 13 south of the Forges while Company K moved west along County Road 70 to Chef-du-Pont.

On the D-Day in the early evening, the Douglas C-47 aircraft are located above the Cotentin at 150 meters above sea level and are preparing to drop the gliders above LZ “W” Operation Elmira: everything is calm on the landing zone until the Horsa and the Waco are within range of the Germans. The fighting on the ground is visible from the sky and many pilots of the gliders decide to change sectors as much as possible. But most of the series 30 and 31 arises on LZ “W”. The same applies to the two following serials which arise respectively at 22.50 and 23.05. The Germans are still numerous to the north of the LZ “W” at the moment of landing and they infiltrate towards The zone to pose from 21 hours: they act by small elements whose numbers vary from one team to a section. Some gliders find themselves isolated in the midst of German soldiers, caught in a violent fire, sometimes even during their approach phase.

The casualties are significant because 157 of the 1,190 airborne soldiers are killed or wounded during the landing phase of the gliders (15 aboard the Waco and 142 aboard the Horsa). There are also a lot of damage to transport units: 5 aircraft are lost and 92 are damaged by German fire: one C-47 pilot dies and eight are injured. Regarding gliders, 26 of the 352 pilots are killed or injured. The gliders deliver their precious cargo of men and materials to the parachutists of the 82nd Airborne Division before the first night spent in enemy occupied territory. 131 tonnes of equipment and equipment are transported to the ground units while waiting for sea refueling.

On 7 June at 7 am, while Galveston and then Hackensack glider operations began, the Americans still failed to secure LZ “W”. At the end of the morning, the 3rd battalion of the 8th Infantry Regiment began to assault and then took Fauville where the German resistance was concentrated. 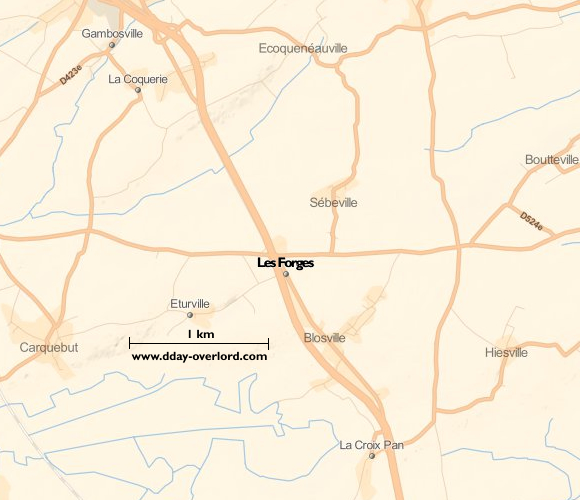