During the Occupation, the Germans used the airfield of the town of Lessay in favor of the Luftwaffe (German Air Force). The municipality is the target of violent aerial bombardments allied on 7 and 8 June 1944 in order to delay the advance of German reinforcements towards the landing beaches. The Abbey of Lessay, one of the oldest abbeys of Normandy founded in the 11th century is destroyed and its ruins collapse on 11 July, mined by the Germans.

On 24 July, the Americans launched Operation Cobra to pierce the front line south of the Cotentin: 1,600 bombers of the 8th U.S. Air Force are engaged and the launch of the ground offensive begins the next day. On the right flank of the starting base of the operation, the American units are instructed to fix the opponent to prevent it from containing the breakthrough.

On the morning of July 27, after an artillery preparation, the 315th Infantry Regiment (79th Infantry Division) commanded by Colonel Bernard B. McMahon began its advance towards Lessay. The regiment first bypassed the city by the west and then the attack back. The Americans seize it despite the resistance of the 243. Infantry Division reinforced by elements of the 353. Infantry Division. The Germans retreated south to avoid being surrounded by their opponents.

From 1 to 25 August 1944, the 830th Engineer Aviation Battalion (EAB), reinforced by the 850th EAB and 877th EAB, is working to rehabilitate and rebuild the airfield south-east of Lessay that the Germans destroyed and mined before retreating. Heavy work is done to level the ground and fill the many craters, while clearing the area of ​​many unexploded shells. The two runways of this ALG A-20 airfield are operational from August 25 to September 28, 1944 and are used by the 323rd Bombardment Group (98th Combat Bomb Wing, 9th Bomber Command). 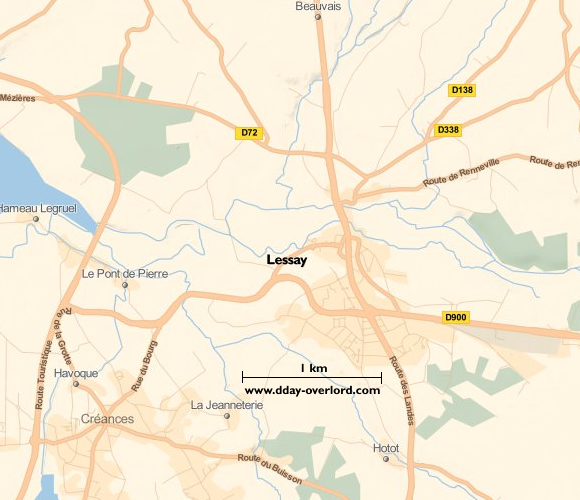