At the beginning of July 1944, the Americans continued their offensive in the direction of La Haye-du-Puits, but the torrential rains which fall in the region do not support the advance by the aviation. It was not until the 3rd of July that the 358th Infantry Regiment and the 359th Infantry Regiment (90th Infantry Division) began the onslaught of the last bolts to reach their objective, namely the town of Lithaire and the land movement of the Mount-Castre. From this location, the Grenadier-Regiment 943 (353 Infantry-Division) Germans commanded by Major Dickertmann are able to observe and correct artillery fire to support the new East-West ‘They installed to block the Americans north of Cotentin: this line is called “Mahlmann line” of the name of the German Generalleutnant Paul Mahlmann, commanding the 353. Infanterie-Division, who imagined it.

Supported by the 359th Infantry Regiment (IR) commanded by Colonel Clarke K. Fales and who suffered heavy casualties during his engagement on 5 and 6 July, the 358th IR under the command of Colonel Richard C. Partridge attacks towards the village Of Lithaire on July 7 with the support of tanks belonging to the 712th Tank Destroyer Battalion. After heavy fighting and violent artillery fire observed by the enemy since the field movement of Mount-Castre, the 3rd Battalion managed to seize the town at 6 pm and made 75 soldiers prisoners in the ranks of the opponent.

The capture of the commune of Lithaire allows the Americans to cut one of the roads of withdrawal of the Germans posted on Mount-Castre. 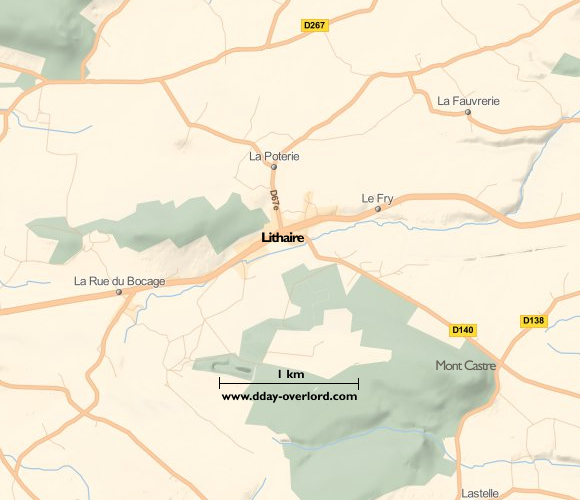