The first landing during the Second World War in Luc-sur-Mer took place on the night of 28 September 1941: the raid, led by Lieutenant Tom Gordon-Hemming, took place in preparation for the landing in order to obtain information on the Norman beaches. Two British soldiers were killed, Elwyn Edwards and Cyril Denman Evans. They are buried in the cemetery of the commune.

The municipality of Luc-sur-Mer is, on June 6, 1944 in the morning, under the control of the 46th Royal Marine Commando attached to the 3rd Infantry Division, as well as the 1st South Lancashire Regiment belonging to the 8th Infantry Brigade, supported by tanks of 22nd Dragoon.

On D-Day at 8 pm, a bold armored reconnaissance led by elements of the 21. Panzer-Division manages to infiltrate until Luc-sur-Mer before retreating in the area of ​​Caen.

However, this place was only liberated on the following day, June 7, with the English commandos taking over the last German cemetery situated at the height of Le Petit-Enfer. 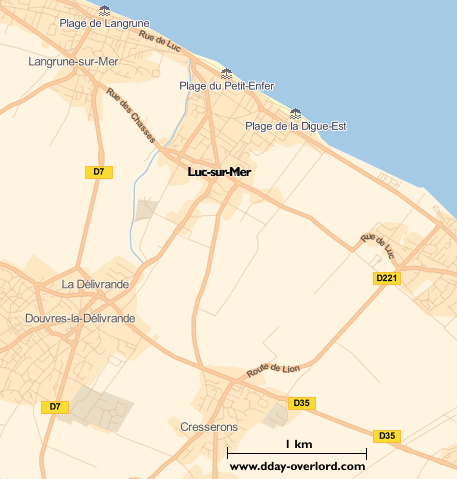