Sainte-Mère-Eglise in 1944 – Battle of Normandy

Sainte-Mère-Eglise was occupied in the spring of 1944 by the German soldiers of the 14th company of the 3rd Battalion of the Grenadier-Regiment 1058 and by the artillerymen of the 4th battery of the Artillery-Regiment 191. This town is located on the national road 13 which crosses the Cotentin from north to south. It is also a necessary crossing point because of the convergence of several departmental roads in its center.

The Americans, during the phase of preparation of the airborne operations preliminary to landing in Normandy, place the village of Sainte-Mère-Eglise in the heart of the jump zones of the 82nd Airborne Division. It is the 505th Parachute Infantry Regiment (505th PIR) commanded by Colonel William E. Ekman who is in charge of seizing the municipality in the early hours of D-Day, which entrusts this mission to Lieutenant-Colonel Edward C. Krause commanding the third battalion. In order to simplify the taking of Sainte-Mère-Eglise, the Americans define a jump zone directly to the north-west of the village, between the Merderet river and the national road 13, coded drop zone “O”).

Downtown Sainte-Mère-Eglise, a few hours before the arrival of the allied paratroopers, a fire broke out in the house of Madame Pommier around 11 pm on June 5, 1944. Transformed into a huge brazier a few minutes later despite efforts of the inhabitants to extinguish it, this fire serves as a reference point in the night to the American pilots. Shortly after 01:50, a stick of company F of the second battalion of the 505th PIR was mistakenly dropped over the town: the Germans, already alerted twenty minutes earlier by the release of two sticks of the 506th PIR of the 101st Airborne Division on The place of the church, pull on the American paras. At least one member of the Fox Company falls in the blaze of the burning house. The parachutes of soldiers Steele and Russel cling to the church and only the latter manages to get out of this bad step immediately. John Steele remained hanging on the bell tower for 45 minutes, injured by a flake of Flak’s shell during his jump, before being taken prisoner by the Germans: the lines of his parachute were cut by Rudolf May and Rudi Escher, who stayed in the church steeple during the battle.

The parachutes of the 505th PIR on drop zone “O” after the arrival of the scouts begin at 01:51 on June 6, 1944, in accordance with the plans of Operation Boston (which consists of the aerial of the 82nd Airborne Division). The 118 sticks were released under excellent conditions and the 505th PIR recorded the best results of all the US airborne regiments deployed during the night of June 5-6, 1944: 60 sticks (50% of the regiment) Land on goal or within one kilometer of the center of the jump zone and 20 sticks are within a circle of three kilometers radius around the drop zone. In total, 75% of the 505th PIR is close to its rally point. The other elements are scattered in the Cotentin region. The 505th paratroopers are accompanied by the division’s staff, the 307th Engineer and the 456th Parachute Field Artillery Battalion (PFAB) with its two howitzers.

The third battalion of the 505th PIR, which touches the soil of Normandy from 2:03 am, collects under the orders of Lieutenant-Colonel Krause and goes in the direction of Sainte-Mère-Eglise. He joined Sainte-Mère-Eglise at 4 o’clock in the morning. A few minutes later, the paratroopers float the starry banner at the town hall; Krause reports at 5 o’clock that he is inside the town and at 6 o’clock that Sainte-Mère-Eglise is under his control. During the day, the paratroopers work to unhook the bodies of several of their comrades killed, blocked by the lines of their parachute in the trees bordering the place of the church.

The inhabitants of Sainte-Mère-Eglise pay a heavy price during the liberation of Normandy: forty-three civilians were killed from May to August 1944 (in particular eighteen on June 6, 1944 following the bombing of the Rue de Carentan, General de Gaulle Street). On D-Day, residents leave their homes to get away from the fighting and bombardments that continue to hit the village until June 7.

On August 1, 1944, the French Free Forces of the 2nd Armored Division commanded by General Leclerc crossed the town. The population pressed to greet these men as they passed.

After the liberation of Sainte-Mère-Eglise, the Americans set up three temporary cemeteries around the commune where nearly 14,000 soldiers are buried: 3,000 near the current sports ground (cemetery N°1), 5,000 nearby Of the road to Chef-du-Pont (cemetery N°2) and 6,000 to the villages of Blosville-Carquebut (cemetery N°3). The bodies of two-thirds of them are repatriated to the United States from 1948 while the remaining third is moved to the military cemetery of Colleville-sur-Mer. 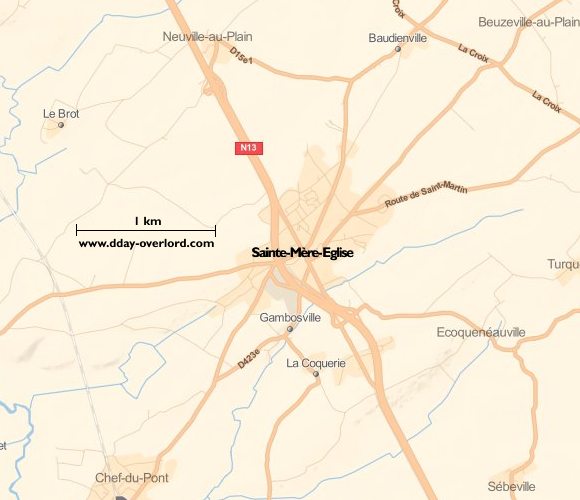