Mathieu in 1944 – Calvados – Battle of Normandy

On the evening of June 6, 1944, the Germans retreated to Mathieu in Calvados after being repulsed by the Canadians of the 8th brigade belonging to the 3rd Canadian infantry division. They settle there defensively and take advantage of the night to reorganize despite heavy human and material losses.

To the east, the 3rd English Infantry Division approaches the outskirts of this town on the evening of D-Day and prepares to proceed to attack the next day. This is notably the case of the Staffordshire Yeomanry Regiment C squadron belonging to the 27th Armored Brigade, which moved east of Mathieu to the south and south-west from the heights of Périers-sur- le-Dan.

On the morning of June 7, 1944, the 9th Brigade assaulted, especially the soldiers of the 1st Battalion King’s Own Scotish Borderers. The latter seized the commune of Mathieu at noon.

Mathieu welcomes several units of the 3rd English Infantry Division during the first days of the Battle of Normandy, including the 2nd Royal Ulster Rifles and the 3rd Recce Regiment (Northumberland Fusiliers). The municipality is also located in the immediate vicinity of the ALG B-10 airfield south of Plumetot, built by the British on June 10, 1944 (in fact, the land used for ALG B-10 belongs to the commune of Mathieu). 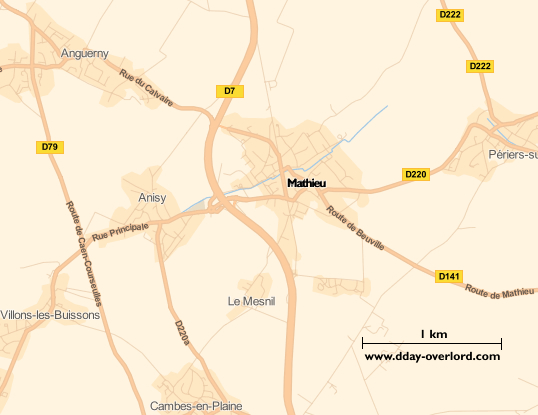