On July 24, 1944, the Allies launched Operation Spring, which aims to capture the heights of Verrières Ridge, which overlooks the region between Caen and Falaise. The town of May-sur-Orne is one of Spring’s objectives: it is to be attacked by the Calgary Highlanders (5th Infantry Brigade, 2nd Infantry Division) who are supported by the Black Watch of Canada Infantry Brigade). The village is held by elements of the 272. Infantry Division.

After a major bombing that took place on the night of July 24-25, the Calgary Highlanders (5th Infantry Brigade) began their offensive but quickly slowed down on their crossing of Saint-André-sur-Orne which is not Secured by the Queen’s Own Cameron Highlanders of Canada (5th Infantry Brigade). However, the outskirts of May-sur-Orne were reached shortly after 6 hours by company C of the Calgary Highlanders, but the Germans quickly recovered from the bombing and counterattacked. Communications go very badly and the Canadian units act without coordination, which greatly penalizes the allied action. The Calgary Highlanders, who had to support since May-sur-Orne the continuation of the offensive towards Fontenay-le-Marmion, is unable to fulfill its mission. The 6th Armored Regiment-1st Hussars (2nd Armored Brigade) was then deployed as a reinforcement to May for support and the offensive was renewed around 9:45 am with the support of the Black Watch of Canada (5th Infantry Brigade). But the Germans launched a counter-attack by Werner Sterz’s Kampfgruppe (task force): Panzerjäger-Abteilung 38 (equipped with Jagdpanther IV tank destroyers) reinforced by Major Schneider-Kostalski’s Panzer-Regiment 3. A deluge of fire and steel falls on the Canadian tanks: only one platoon leader manages to extricate himself from this trap, which sees the destruction of several tanks.

At 1:30 pm, the tanks survivors of the 1st Hussars retreated north towards Saint-Martin-de-Fontenay. The Canadian staff of the 2nd Infantry Division is ordered to relaunch its offensive to finally take over its objectives to put an end to German actions in the sector. A new attack is then directed to May-on-Orne with the reserve units at 9 pm, unsuccessfully.

The front line did not evolve practically for more than a week in spite of constant bombing and a new attack during the afternoon of August 5 which ended in failure. It was not until the launch of Operation Totalize on 7 August 1944 that the Allies finally seized May-sur-Orne. The Canadians of the 6th Infantry Brigade, 2nd Infantry Division, began their offensive from Saint-Martin-sur-Orne and reached the outskirts of May-sur-Orne at the dawn of August 8th. Despite heavy bombardments, the Germans hold the line and defend themselves fiercely, inflicting heavy losses on the Canadian ranks. Nevertheless, the sacrifices of the assailants are paid and the Fusiliers Mont Royal of Montreal seizes May-sur-Orne around 6 pm. 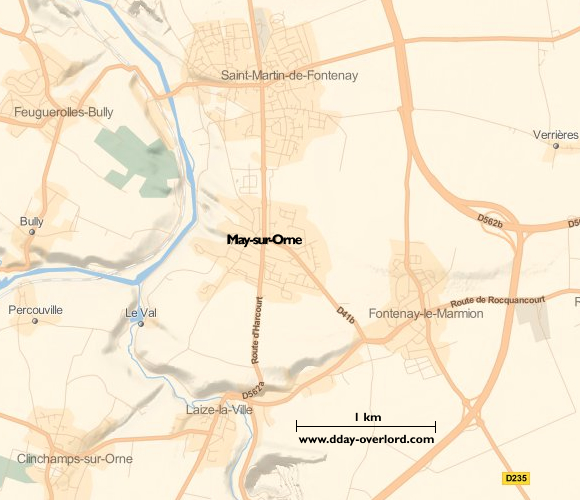