Millières in 1944 – Manche – Battle of Normandy

As of July 26, the 8th Infantry Division commanded by Major General Donald A. Stroh launched an offensive in the direction of Saint-Sauveur-Lendelin but was slowed down by the Germans who multiplied the artillery dams. The offensive resumed the following day, July 27, after a major artillery preparation. The soldiers of the division then manage to cross the departmental road 900 connecting Périers to Lessay, then they reach the village of Millières. The 28th Infantry Regiment, commanded by Colonel Kenneth E. Anderson, is in charge of seizing it and is opposed to the German paratroopers of the Fallschirmjäger-Regiment 6 (91. Infantry Division) supported by elements of the SS Panzer- Division “Das Reich”. The Americans seized the village of Millières and reached the outskirts of the departmental road 94, one kilometer to the south. They hold this position and set themselves up defensively to fight against any opposing counterattack. They resume the advance towards the south as of July 28th. 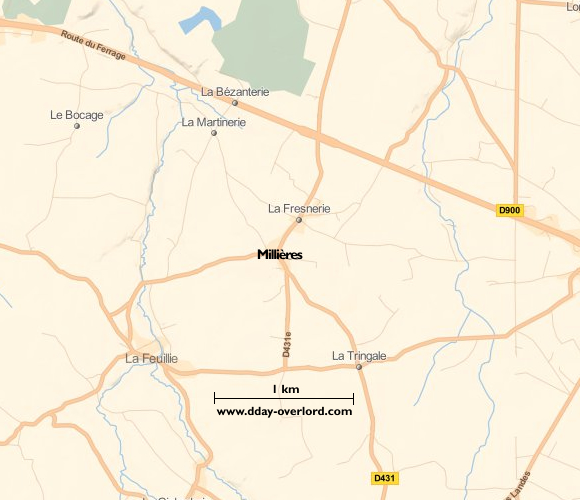