At the beginning of July 1944, the Americans continued their offensive in the direction of La Haye-du-Puits, but the torrential rains which fall in the region do not support the advance by the aviation. It was not until 5.30 am on 3 July that the 358th Infantry Regiment and the 359th Infantry Regiment (90th Infantry Division) began the assault in the rain with the last bolts to reach their objective, namely the municipality of Lithaire And the terrain movement of Mount Castre (in French: Mont-Castre). From this location, German forces belonging to the Grenadier-Regiment 943 (353 Infantry-Division) commanded by Major Dickertmann are able to observe and correct artillery fire to support the new East-West defensive line they installed to block the Americans north of Cotentin: this line is called “Mahlmann line” of the name of the German Generalleutnant Paul Mahlmann, commanding the 353. Infanterie-Division, who imagined it.

The 359th Infantry Regiment commanded by Colonel Clarke K. Fales is on the right flank of the division and must take the heights of Mount Castre (referenced on the maps as Hill 122). The 358th Infantry Regiment commanded by Colonel Richard C. Partridge is on the left flank and is responsible for recognizing the southern edge of Hill 122. The 357th Infantry Regiment (IR), placed in reserve, puts its heavy bearings at Profit of the 1st step. Opposed to a formidable resistance, Colonel Partridge caused his regiment to retreat a hundred meters and demanded artillery support to dislodge the Germans from their defensive positions. At midday, he ordered the resumption of the progression but tracked vehicles appear and sow panic in the ranks of the 358th IR. At the end of this first day of fighting for the control of Mont Castre, the German line of defense stood firm and the Americans managed to progress only about 500 meters at the cost of 600 casualties: artillery observers from Grenadier-Regiment 943 take full advantage of the views of Hill 122 to set accurate and deadly fire.

On July 4th, National Day in the United States, the 90th Infantry Division commanded by Major General Eugene M. Landrum is about to resume the offensive at dawn. The attack is preceded by a 10-minute artillery preparation but the Germans in turn trigger a barrage which suggests that they will also go on the offensive: the American assault is temporarily delayed and the soldiers are instructed to stand ready to repel the opponent. However, no German attacks took place. 45 minutes after the initially scheduled schedule, Colonel Fales started the 359th IR: the Germans did not appear until a few minutes later, triggering many automatic shots that set the Americans and confusion, occasioning the partial withdrawal of the regiment. At dusk, the men of Fales manage to resume the progression and advance for more than 2 kilometers before stopping for the rest of the night. The Germans are out of breath and they are no longer able to enter reserves. Grenadier-Regiment 943 is fully engaged alongside paratroopers of the Fallschirmjäger-Regiment 15 (Fallschirmjäger-Division). Despite the critical nature of their situation, they hold fast and prevent the Americans from progressing more rapidly: 90% of their losses Are due to German artillery. Disorganized, exhausted and permanently wet for nearly a week, the soldiers have a particularly low morale.

The return of the good weather on July 5 allows the commitment of the air support. Against all odds, the Germans still resist despite the deluge of steel and fire falling on their positions. General Landrum is obliged to re-articulate his device because of the high losses of his division: the 358th IR is shifted towards the south in order to reinforce the 359th IR in the fighting for the capture of Mount Castre. On July 6th, a battalion of the 359th IR made a maneuver bypassing the ground movement from the north, supported by the air forces and taking advantage of the cutlery offered by the hedgerows of the Norman hedgerow to progress away from the sights. Meanwhile, the two other battalions reinforced by a battalion of the 358th IR attacked Mount Castre from the east. Perceiving this maneuver as an attempt to encircle, the Germans expand their defensive device so as not to let themselves be flanked. The front of the assailants is not completely hermetic, several German units infiltrate and take the soldiers of the 90th Infantry Division back: these actions slow down the American progression without stopping it. At nightfall, the Americans managed to place four battalions on Hill 122 and reached the highest point on the hill. However, they are severely lacking in ammunition and food and the evacuation of the wounded is difficult because of the particularly dense vegetation. They expect a counter-attack all night but this one does not come. Colonel Robert L. Bacon replaces Colonel Fales at the head of the 359th Infantry Regiment as of this day.

At 2345 hours, the Germans launched a formidable artillery preparation concentrated on American positions north of Mount Castre, that is, on the right flank of the 90th Infantry Division. Elements belonging to the 77. Infantry Division then launch a land assault which is repelled in suffering for their opponents. The Germans managed to isolate soldiers from the 357th IR. On 7 July General Landrum was still not entirely satisfied with the situation of his division on Mont-Castre because the front was not fully maintained and heavy weapons and tanks were slow to move in the front line. Made difficulties to move. A company of the 357th IR is launched to attack the isolated elements but it suffers very heavy losses, its unit commander being killed, and the Germans counter-attack to put an end to the adverse progress. While radio communications were still possible, no contact can be made with the encircled soldiers; The next morning, July 8, six soldiers joined the lines of the 357th IR and realized that all their comrades were made prisoners or killed. The Germans are unable to continue their counterattack and the front line stabilizes for 48 hours. On July 10, the 90th Infantry Division relaunched the advance and moved away from Mount Castre. 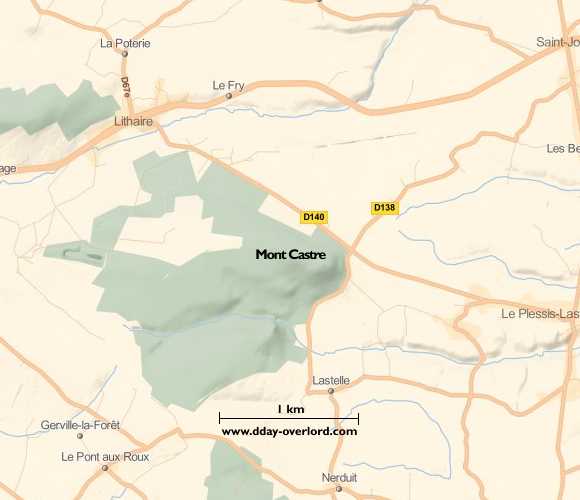