Montebourg in 1944 – Manche – Battle of Normandy

As early as June 7, 1944, American soldiers stationed at Sainte-Mère-Eglise were ordered to advance along the national road 13 towards Montebourg, an important crossroads road and one of the last locks before Valognes and Cherbourg . But the Germans, belonging in this sector to the Grenadier-Regiment 1058 (91. Infanterie-Division), Grenadier-Regiment 729 (709 Infantry Division), are firmly set up for defense.

On June 10, the 12th Infantry Regiment (4th Infantry Division) commanded by Colonel Russell P. Reeder, Jr reached the heights east of Montebourg. But on its left flank, west of National Highway 13, the 8th Infantry Regiment (4th Infantry Division) commanded by Colonel James A. Van Fleet is still about 1,000 meters to the south, braking action of Their opponents having inflicted delays and heavy losses on the assailants. General Raymond O. Barton, commander of the division, is seeking to align the two regiments. These delays are as many additional days allowing the Germans to build a solid line of defense centered on Montebourg. The Americans underwent a major counter-attack on the evening of June 10 in the area of ​​the 12th Infantry Regiment, which was stopped only by the intervention of land and naval artillery. The units were then ordered to set up in defensive positions until the division re-articulates its line of contact.

From June 12 to 14, the 4th Infantry Division progressed east of Montebourg, passing the departmental road 42: during this time and during the following four days, units facing the city had to conduct several patrolsto check the defense line of the adversary, without committing itself to the commune. The artillery shells (terrestrial, aerial and navy) are unleashed on Montebourg, reducing the city into a vast pile of ashes.

On 19 June at 3 am, without artillery preparation, General Barton launched his offensive to capture the town. The 8th Infantry Regiment passed Montebourg by the west, while the 12th Infantry Regiment also made a by-pass maneuver  by the east. Although the units manage to progress without being delayed, the losses are numerous. The Sherman tanks of Company B of the 70th Tank Battalion also pass the attack, bypass the west and storm the German lines in reverse, creating a lot of disorder in the opposing lines. The Germans, commanded by the Oberstleutnant Günther Keil, received orders at noon to retreat north to avoid encirclement: they were cut to pieces by the Americans who had already largely bypassed Montebourg and forbade any withdrawal. At 10 o’clock, supported by the 801st Tank Destroyer Battalion and the 183rd Field Artillery Battalion, the 3rd Battalion of the 12th Infantry Regiment is scheduled to attack the Commune from the west. When it entered the city, the Germans had already abandoned it, leaving behind only a heap of ruins and nearly 300 Norman civilians who survived in terrible conditions with multiple bombardments.

At dusk, the Americans are already more than three kilometers northwest of Montebourg. 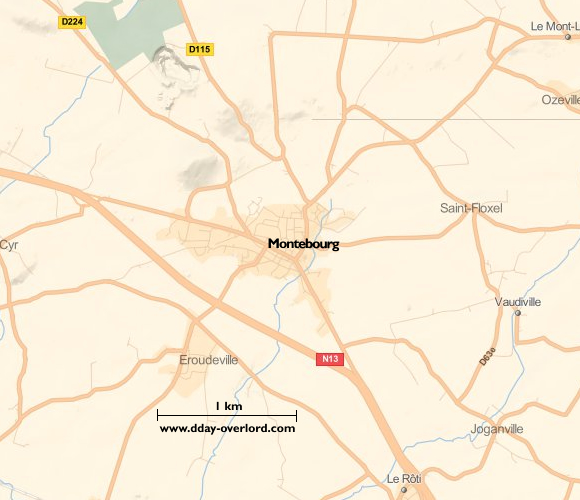