On 13 June, the Americans were preparing for the capture of Cherbourg and they initially planned to reach the western coasts of Cotentin. After the capture of the village of Sainte-Colombe on June 16, soldiers of the 9th Infantry Division headed for Néhou, company E of the 60th Infantry Regiment at the head, supported by tanks of the B squadron of the 746th Tank Battalion. The 2nd Battalion of the 60th Infantry Regiment, under the command of Lieutenant-Colonel Michael B. Kauffman, progressed under small arms fire and mortar shells but failed to reach Néhou, particularly defended by German self-propelled guns.

Companies F and G, having suffered significant losses, retreat to Sainte-Colombe and dig defensive positions for the night. The battalion, missing cruelly of ammunition, is refueled at the end of the day. After dark, the 3rd battalion reinforces the 2nd battalion to the west of Sainte-Colombe and at 6 am on June 17, it leads the assault of Néhou. The Germans retreated to the west, abandoning the village to their opponents, but a whole field artillery battery was captured by the Americans in the Nehou area by the 1st Battalion of the 60th Infantry Regiment. Néhou is released and the 9th Infantry Division proceeds westwards on the departmental road 42. 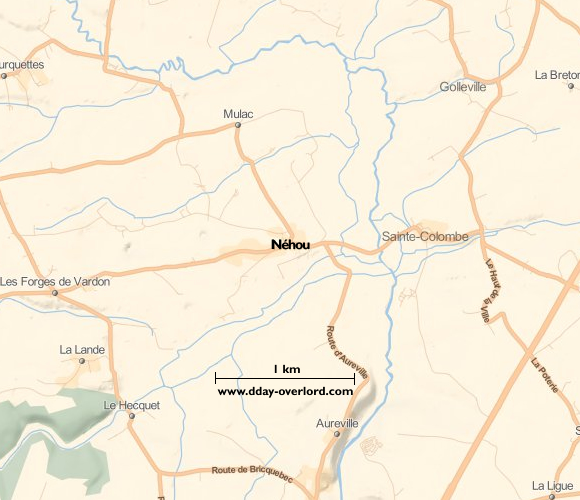