Neuilly-la-Forêt in 1944 – Calvados – Battle of Normandy

In the spring of 1944, the village of Neuilly-la-Forêt was occupied by the command post of Grenadier-Regiment 914 (352. Infanterie-Division) under the command of the Oberstleutnant Ernst Heyna.

After the liberation of Isigny on June 9, 1944, the 175th Infantry Regiment (29th Infantry Division) commanded by Colonel Paul R. Goode continued its progress towards the south and on June 10 he reached the outskirts of the hamlet of Neuilly-la- Forest. Opposed to Grenadier-Regiment 914, the 1st Battalion under Lieutenant-Colonel Roger S. Whiteford engaged the combat with the support of the Sherman tanks of the 747th Tank Battalion. After swift exchanges of shots, the Americans seized the few houses and set fire to a barn containing a large amount of fodder.

In July 1944, the Americans installed the 56th General Hospital east of Neuilly-la-Forêt. From 27 July to 6 August 1944, the 832nd Engineer Aviation Battalion (EAB) built an airfield called ALG A-11 north of the town. Especially used by the American fighters of the 474th Fighter Group (belonging to the 70th Fighter Wing, 9th Fighter Command), it is operational from 6 August to 5 September 1944. 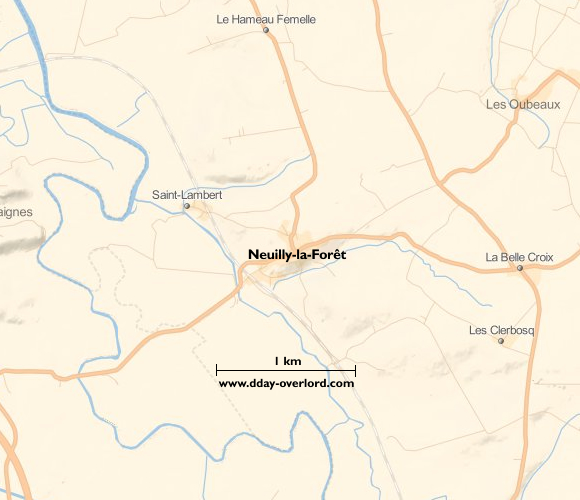