On June 7, 1944, the Regina Rifles Regiment (commanded by Lieutenant-Colonel F. M. Matheson), belonging to the 7th Brigade of the 3rd Canadian Infantry Division, seized Norrey-en-Bessin without fighting. This locality is, with the municipality of Bretteville-l’Orgueilleuse, a lock which allows to control a part of the national road 13 which connects Caen with Bayeux.

On the same day, the Germans led by S.S. Panzergrenadierregiment 25 (S.S. Pz.Gren.Rgt 25.) led by SS-Standartenführer Kurt Meyer and belonging to the 12th S.S. Panzer-Division Hitlerjugend counterattack from Caen towards the beaches. Surprised by the speed and destructive power of this counter-offensive, the Allies set themselves up in defensive in this sector and plan to fix the adversary to destroy it with their support.

The Canadians managed to postpone a first counterattack in Norrey-en-Bessin. The tanks of the 6th Canadian Cavalry Regiment “First Hussars” support the men of the Regina Rifles. But on the night of 8-9 June 1944, 23 Panther tanks of the 3. Panzerkompanie of the 1st Battalion (commanded by the SS-Sturmbannführer Arnold Jürgensen) of the SS Panzerregiment 12 (commanded by the SS-Standartenführer Max Wünsche) carried out an armored raid From Rots towards Bretteville-l’Orgueilleuse and Norrey-en-Bessin. Faced with the courageous Canadian resistance, the Germans are unable to break through the front line.

The SS attempted a new attack at 1230 hours on June 9th in Norrey-en-Bessin with 12 Panther tanks: 9 Sherman tanks (including some Sherman “Firefly”) belonging to the various regiments of the 2nd Canadian Armored Brigade, are sent to the positions of the Regina Rifles Regiment to support them. Approximately one kilometer from the village, the German armored vehicles made a maneuver to the south, thus presenting their flank to the Canadian Punder anti-tank guns that immediately opened fire. The Allied artillery also makes several shots that stop the German assault. 7 of the 12 Panther tanks are destroyed during this engagement.

The Canadians maintained their defensive position in the Norrey-en-Bessin area until the launch of Operation Epsom on June 26, 1944. 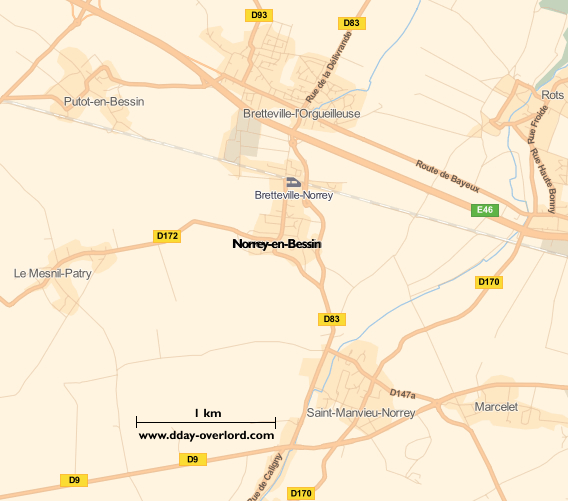