Picauville in 1944 – Manche – Battle of Normandy

Picauville is placed under the responsibility of Grenadier-Regiment 1058 (91. Infanterie Division). During the preparation phase of Operation Overlord, the Allies place this commune to the west of the bridgehead that US paratroopers have to control on D-Day. For this purpose, a drop zone (DZ) is chosen at the northern edge of Picauville, it is coded “N”. This is the 508th Parachute Infantry Regiment (82nd Airborne Division) commanded by Colonel Roy E. Lindquist who is in charge of seizing the village.

On June 6, 1944, shortly after 1 am, while C-47 aircraft belonging to the 77th Squadron and carrying paratroopers from the 101st Airborne Division destined for the “C” drop zone (north of Hiesville) fly over Picauville beneath the cloud cover, German anti-aircraft defense opens fire and hit several aircraft crashing in the vicinity (in the hamlet of Fournecrop and Clainville).

An hour later, the C-47s at the head of the 508th PIR carried a good approach to the DZ “N” (unlike the pilots of Operation Albany carrying 101st Airborne parachutists, Operation Boston carrying the 82nd Airborne prefer to fly over the cloud layer) but the rest of the pilots do not follow, mainly because of the German Flak’s shots that disrupt the flight formations. The parachuting is carried out between 02:08 and 02:20 at a height that is far too high, at 700 meters of altitude (while that of the 101st Airborne Division is carried out at 150 meters). As a result of the difficulties encountered by the pilots, 33 of the 132 sticks of the 508th PIR land less than a kilometer away from the jump zone. Half of the regiment’s paratroopers (about 65 sticks) are not able to accomplish their mission either because they land more than 15 kilometers from the DZ or because they are completely isolated and lost in the night.

The 508th PIR can not act organically with its three battalions. It is organized into four groups of circumstances: the “L” group led by Colonel Lindquist, the group “W” by Major Warren, the group “S” by Lt. Col. Shanley and the group “G” Headed by two captains, Novak and Simonds, consisting of isolated parachutists encountered at random and ranging in size from about thirty to nearly 200. The Shanley “S” group commanding the 2nd Battalion of the 508th PIR looks for several solutions to attack the position of Pont-l’Abbé and decides to move initially towards a ground movement located east of Picauville, near the hamlet of Caponnet (point 30, known by the Americans as “Hill 30”).

The misfortune encountered by the men of the 508th PIR during the parachuting with the scattering of the sticks is temporarily put in brackets by the unexpected action of a group of a dozen paras directed by lieutenant Malcom Brannen, commander of the headquarter company of the 3rd battalion, and lieutenant Harold V. Richard of company A, 1st battalion, also reinforced by two artificers of the 307th Airborne Engineer Battalion. Shortly after four o’clock in the morning, the paras sought information from Norman civilians living on the farm of La Minoterie, two kilometers north of Picauville, when a car was heard on the road. His driver refused to stop, the Americans opened fire and the car (branded Duesenberg) was embedded in a wall of the farm: on board was the Generalleutnant Wilhelm Falley, commander of the 91. Luftlande Infanterie-Division which is killed. A Major is also killed while a corporal is taken prisoner.

The Americans abandoned the hope of capturing Picauville on D-Day and regrouping to the east in the region of the causeway of La Fiere, a hub of the sector. Meanwhile, the Germans reinforced their position around Picauville.

On June 10, 1944, the 358th Infantry Regiment commanded by Colonel James V. Thompson and belonging to the 90th Infantry Division began the offensive directed towards Picauville from Chef-du-Pont. The fighting is particularly violent and the American infantrymen progress slowly. Nevertheless, supported by elements of the 508th PIR, they manage to jostle the German lines and seize Picauville that same day, forcing their opponents to retreat to Pont-l’Abbé.

From June 20 to 26, 1944, an aviation runway was built north of Picauville by the 826th Engineer Aviation Battalion (EAB). This airfield, called ALG A-8 N by the Americans, was operational from June 26 to November 5, 1944 And is mainly used for night missions by the 405th Fighter Group on P-47 Thunderbolt as well as by the No.142 Wing on Mosquito XIII. 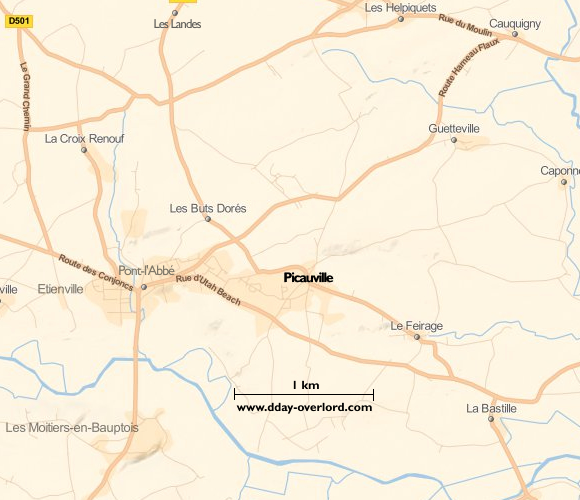