Quinéville in 1944 – Manche – Battle of Normandy

The site of Quinéville houses an artillery position occupied by the 4th battery of the Heeres Küste Artillerie Abteilung 1261: the battery of Mount Coquerel (coded Wn 136 as well as Wn 22 by the Germans), armed with four 105 mm K331 guns and built in 1943. In the same year, on the night of December 26 to 27, the Allies launched a commando operation in Quinéville called “Hardtack 21” led by Lieutenant Francis Vourc’h with nine French commandos of No. 1 French Troop, No. 10 Commando. They carried out for two hours and successfully an extremely perilous mission of reconnaissance of the beach in order to obtain various information: disposition of the minefields, positioning of the antitank obstacles, direction and force of the current, slope of the beach… They saw a piece of a “Rommel asparagus” to analyze the metal and carry out many cores of sand so that it is compared with that of the beaches of Great Britain (in order to choose the locations of the drives). This information is particularly useful to the Allies in the preparation of the landing which is to take place in Utah Beach, a few kilometers to the south.

On June 6, 1944, the battery of Mount Coquerel, commanded by the Oberleutnant Schultz, was bombed by the USS Tuscaloosa.

After the capture of Azeville in the middle of the afternoon of June 9, 1944, General Raymond O. Barton, commander of the 4th Infantry Division, wants to relaunch the progress of his regiments after the difficult fighting to seize the German batteries of ” Azeville and Crisbecq. To this end, he set up an inter-armed battle group consisting of the 22nd Infantry Regiment, the 746th Tank Battalion and the 899th Tank Destroyer Battalion under the command of General Henry A. Barber. This Task Force starts at 4:30 pm but is stopped at Ozeville by defending elements belonging to Grenadier-Regiment 922 (243 Infantry Division).

At 9:15 am, a 15-minute artillery preparation (land and sea) that sweeps the heights west of Quinéville precedes the attack. At 0930 hours, the last shells, green smoke, signal the end of the preparation of artillery: the infantrymen and the American tanks begin the progression towards their respective objectives under enemy fire. For three hours, they are the targets of the German artillery which is equipped in particular with Nebelwerfer rocket launchers. As of 1 pm, the units are in the planned location, the 1st battalion of the 22nd Infantry Regiment takes over the battery of Mount Coquerel. At 1600 hours, company K of the 39th Infantry Regiment advanced at the head of the 3rd battalion with the support of the Sherman tanks of the 70th Tank Battalion: in the first moments of the attack, it met with little resistance and succeeded in making 68 prisoners. On his right flank, the 70th Tank Battalion detects vehicles and engages in combat: they are in fact friendly tanks in support of the 1st Battalion of the 39th Infantry Regiment, which recognizes the coast from south to north. After positive identification the friendly shots cease, without losses.

The 3rd section of company K, at the head of the column, entered Quinéville while mortar shells fell nearby. When it approaches the coast, it is taken to task by an anti-tank gun installed in a bunker located near the beach: the Germans concentrate their defense to the east, around the fortifications in edge of sea. The companies I , K and M record very heavy losses and the possibilities of maneuvers and shots are limited by a very compartmentalized terrain. Lieutenant-Colonel Robert H. Stumpf, commander of the 3rd Battalion, demands a blind fire on the enemy position with smoke bombs but these are unavailable. The tanks of the 70th Tank Battalion then entered Quineville to support the infantry as closely as the artillery tried to destroy the German casemates, without success. German mortar shells obliged the tanks to withdraw, forcing the infantry to settle the situation on its own. Stumpf ordered company L, positioned on the left flank of Company K, to mount an assault when, at the same time, smoke bombs fell on the German fortifications: immediately Company K resumed its action, 1st and 3rd Sections at the head, masked by the curtain of smoke. When the Americans reached the German casemates at 9:30 pm, the Germans surrendered. Company K recorded the loss of 33 of its own (5 killed and 28 wounded).

Initially, the Allies had planned to set up a landing port in Quineville for the American supply in the Cotentin, but the idea was abandoned on June 12 in favor of the installation of a new landing area in Utah Beach, Baptized “Sugar Red”, located north of “Tare Green”. 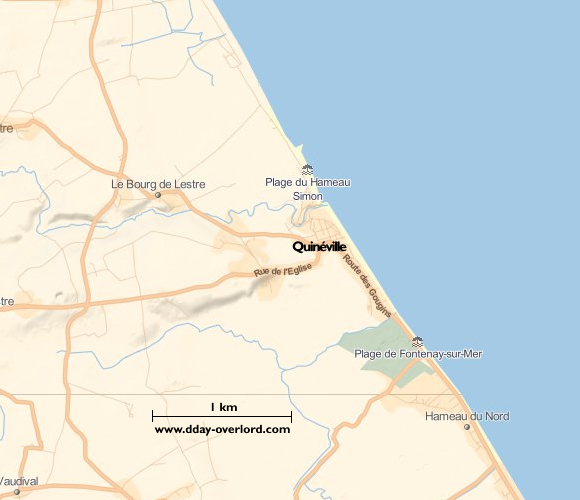