As part of Operation Epsom, which aims to pierce the front to the west of Caen as of June 26, 1944, a flank offensive in the direction of Rauray and Fontenay-le-Pesnel is prepared by the British. It begins at dawn on 25 June and the 146th Infantry Brigade of the 49th Infantry Division is in charge of the capture of Rauray, the village being situated on a field movement serving as a formidable observation post of the region. But for two days the Germans of the S.S.-Panzergrenadierregiment 26 (12th Panzer-Division Hitlerjugend) and the Panzer-Lehr-Division managed to contain this attack as well as possible.

On June 27, the 70th Infantry Brigade (49th Infantry Division), supported by the 8th Armored Brigade, was ordered to renew the offensive in the direction of Rauray. At about 8 am, Company A of the 11th Battalion Durham Light Infantry launched an assault, but was cut to pieces by the SS soldiers. Of the 70 soldiers in the two platoons, only 6 were still able to fight . The Scottish 1st Battalion Tyneside Scottish also manage to reach the village but they suffer very heavy losses. Fierce fighting ensues throughout the day but between 12:00 and 14:00, the two sides agree to establish a short truce in order to raise the wounded and evacuate the dead. At 1600 hours, the Germans abandoned Rauray to the British and retreated 600 meters further south. The 70th Infantry Brigade stops there, taking time to reorganize after these two terrible days of fighting. The Germans are also severely affected: the 10th company of the S.S. Panzergrenadier Regiment 26 has only two non-commissioned officers and twenty non-commissioned members.

On the next day, June 28th, 1st Battalion Tyneside Scottish resumed the advance towards the south before being stopped by the opponent which obliges him to retreat along a defensive line to Rauray height. During the following days, the Germans of the Kampfgruppe Weidinger (task force, commanded by the SS-Obersturmbannführer Otto Weidinger and composed of the 1st Battalion, SS-Panzergrenadier Regiment 3. “Deutschland”, 1st battalion and 14th, 15th and 16th companies of the SS-Panzergrenadier Regiment 4. “Der Führer”, 2. SS Panzer-Division “Das Reich”) bombarded by direct and indirect fire the village.

On 1 July at 6 am, Kampfgruppe Weidinger attacked the British positions defending Rauray and managed to break the line of defense, thus isolating the 1st Battalion Tyneside Scottish. German soldiers and tanks are also opposed to the 11th Battalion Durham Light Infantry which is engaged in the battle in the heart of Rauray. Around 10 am, after very heavy fighting, Weidinger made a tactical withdrawal of his troops and then renewed the assault at 11 o’clock but without more success. At noon, elements belonging to the SS Panzer-Division “Hohenstaufen” attack in turn towards Rauray and succeed in upsetting the opposing lines; For four hours they fought hard, but at six o’clock they fell back against the formidable resistance of the British. On this one day, the 1st Battalion Tyneside Scottish recorded the loss of 132 of its soldiers.

Unable to continue south, the British maintained this line of defense in the Rauray sector for almost a month and it was not until about July 30 that the front moved definitively. 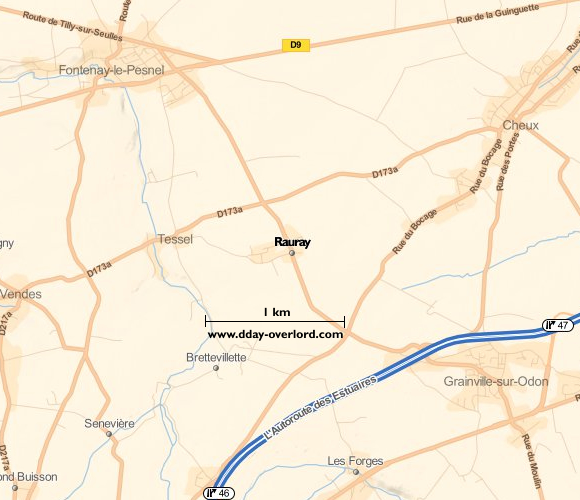