Rocquancourt in 1944 – Calvados – Battle of Normandy

The commune of Rocquancourt is located on a high point called the crest of Verrieres and which overlooks the area between Caen and Falaise. Defended by elements of the 272. Infantry Division, the Allies plan to seize it with the launch on 18 July 1944 of Operation Atlantic but German artillery put an end to the offensive in this sector. On July 24, 1944, the Allies launched Operation Spring, which aimed to capture the heights of the Verrières Ridge once again, but once again the Canadians were unable to achieve their objectives and were stopped by the Germans.

The front line did not evolve for more than a week in spite of constant bombing, and it was not until the launch of Operation Totalize on the evening of August 7, 1944 that the Canadians of the South Saskatchewan Regiment (6th Infantry Brigade, 2nd Infantry Division) can begin their offensive from Verrieres towards Rocquancourt, whose defenses have been reinforced by the presence of the Kampfgruppe Meyer of the 9. SS Panzer-Division “Hohenstaufen”. Preceded by motorized elements of the 8th Reconnaissance Regiment (14th Canadian Hussars), they launched the assault shortly before midnight after intense bombing of the opposing positions. The Germans evacuated the village as a result of the artillery fire, leaving behind some delaying elements to sow disorder among the Canadians. The village of Rocquancourt was quickly liberated on August 8 at midnight 45, but German mortar shells continued to fall in the middle of the houses, wounding the Lieutenant-Colonel Frederick A. Clift, Lieutenant-Colonel Frederick A. Clift, to be evacuated, fearing not to be able to command his unit in the event of an opposing counter-attack.

August 11, 1944: Soldiers of the South Saskatchewan Regiment aboard a Schwimmwagen captured to the Germans. Photo: US National Archives. 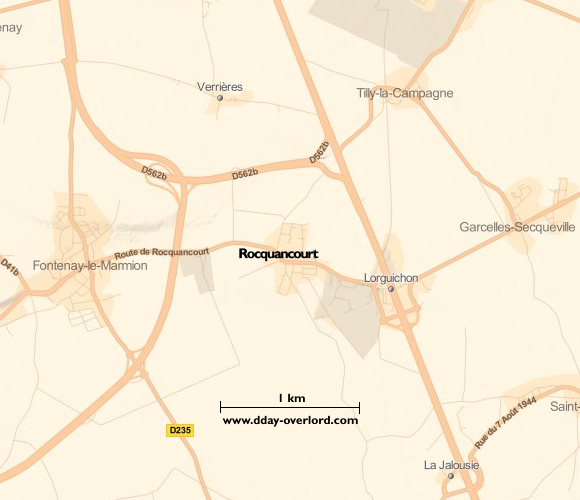