In the aftermath of the SS Panzergrenadierregiment 25 (SS Pz.Gren.Rgt 25.) counter-attack led by SS Standartenführer Kurt Meyer and belonging to the 12th SS Panzer-Division Hitlerjugend towards the beaches, Germans seek to continue the exploitation their counter-offensive insofar as their adversaries are destabilized.

Thus, on 8 June, the 15. Aufklärungskompanie of the SS Pz.Gren.Rgt 25. infiltrates from the commune of Rots in the direction of Bretteville-l’Orgueilleuse and Norrey-en-Bessin against the Regina Rifles Regiment and Of the Chaudière regiment (belonging respectively to the 7th and 8th brigades of the 3rd Canadian infantry division), supported by Panther tanks of the 3. Panzerkompanie I./SS-Pz.Rgt 12. Stopped by the men of Regina Rifles Regiment at night, they retreat and return to Rots in the early afternoon.

The first company of the SS-Panzergrenadierregiment 26 arrives in reinforce to Rots and must undergo the repeated assaults of the English commandos of No. 46 Royal Marine from 11 June 1944 supported by Canadian elements (regiment of the Chaudière and 10th regiment armored “Fort Garry Horse”). The Germans lose 122 soldiers and crew members, killed in action. The Allies take control of Rots before nightfall, at the cost of very heavy losses.

The Allies installed the General Staff of the 1st Canadian Army, commanded by General Crerar, in Rots Castle. A camp specially dedicated to the press conferences of the Allied military forces is also installed in the Rots area.

On July 14, 1944, the French National Day, a military ceremony and an open-air mass were organized in the center of Rots with the local population. 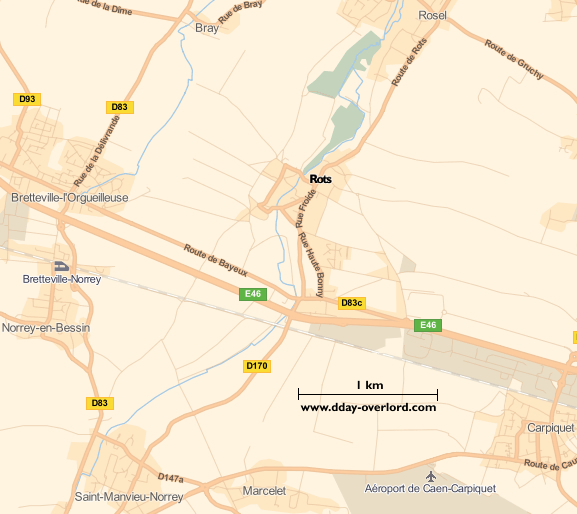