Saint-Aubin-d’Arquenay in 1944 – Calvados – Battle of Normandy

The commune of Saint-Aubin-d’Arquenay in Calvados is hard hit by the allied bombardments on D-Day and two thirds of the houses are in ruins. The locality is held by Grenadier-Regiment 736 belonging to the 716. Infantry-Division. Immediately after landing on Sword Beach, the 1st Special Service Brigade (1st SSB commandos, commanded by Lord Lovat and attached to the 3rd Infantry Division) headed for the eastern shore of the Orne River to reinforce the positions held by the Paratroopers since the early hours of 6 June 1944.

The No.6 Commando of the 1st SSB opens the march to the brigade of Lovat and progresses along the road linking Colleville-sur-Orne (now Colleville-Montgomery) and Saint-Aubin-d’Arquenay: many snipers slow the advance of the British and the fighting for the taking of the commune are violent. The commandos manage to seize the commune shortly before noon.

The No.4 Commando advances in column behind the No.6 Commando. It reaches the town before continuing in direction of Bénouville. The unit also recorded losses at the approach of Saint-Aubin-d’Arquenay, due to snipers who were still present in the area.

At around 9 pm, many gliders carrying reinforcements from the 6th Airborne Division landed between the Canal de Caen and Saint-Aubin-d’Arquenay, in accordance with the plans for Operation Mallard.

In the weeks following D-Day, a runway is constructed on this landing zone (coded “W”) in order to disengage the gliders that have landed there: the work ends on July 19, the runway measuring 915 meters long and 92 meters wide. 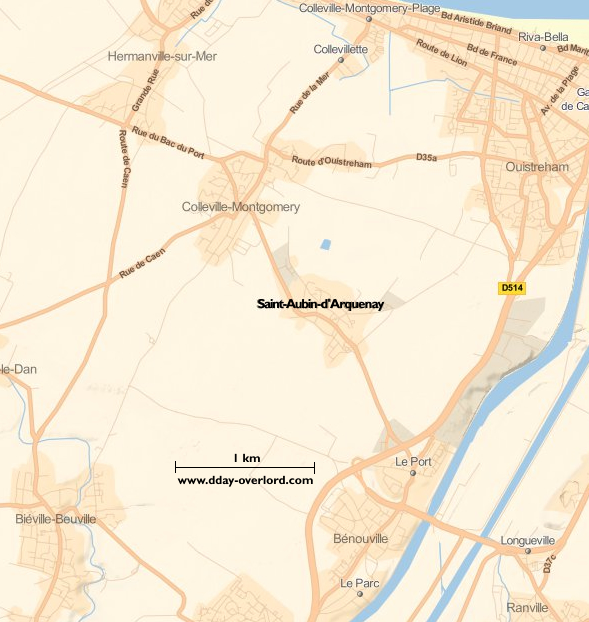