Saint-Jacques-de-Néhou in 1944 – Manche – Battle of Normandy

On June 17th, as they sought to reach the western coast of Cotentin before proceeding north of Cotentin, American soldiers of the 60th Infantry Regiment (9th Infantry Division) commanded by Colonel Frederick J. de Rohan headed for Saint-Jacques-de-Néhou, repelling elements belonging to the 77. Infanterie-Division and the 265. Infanterie-Division. The 1st Battalion of the 39th Infantry Regiment (IR) is temporarily attached to the 60th Infantry Regiment (IR) and is expected to seize the same day. Starting at 2:30 pm, the battalion commanded by Lieutenant-Colonel Henry P. Tucker reached the edge of the village and seized it.

Tucker then set up his battalion in defensive for the night north of Saint-Jacques-de-Néhou and the device is in place on June 18 at 2 o’clock in the morning. At 4:30 am, the Germans of the 2nd and 3rd battalions of Grenadier-Regiment 1049 (77. Infanterie-Division) tried to infiltrate through the airlines of companies A and B, which immediately retaliated: 900 mortar shells were fired by the Americans who, in the early minutes of the fight, fail to observe the opponent due to the darkness. Tucker ordered a gradual withdrawal of his units along the east-west road crossing the village, under the cover of the heavy weapons of the battalion. As of 9 am, American artillery is unleashed on the German front line north of Saint-Jacques-de-Néhou while the 81-mm mortars of the Tucker battalion consume all their shells: the Germans, Disorganized and having suffered heavy losses as a result of these terrible bombardments, retreated and the Americans manage to resume their positions of the night. About sixty wounded soldiers are captured and evacuated while the bodies of nearly 250 Germans are found on the battlefield. 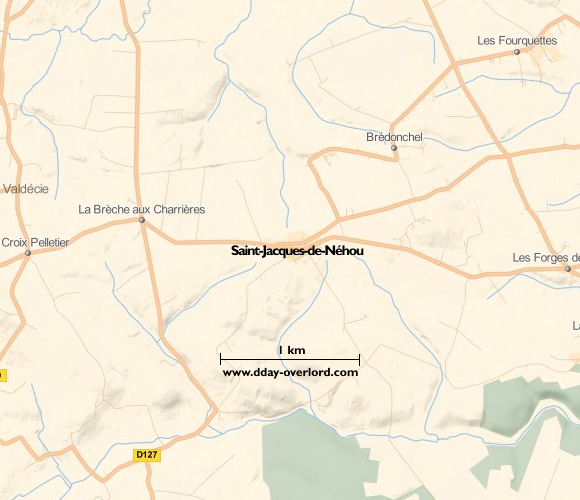