In the spring of 1944, Saint-Lô houses the headquarters of the 84th German Army Corps (LXXXIV Armeekorps). The Allies’ original plans for the liberation of the city nine days after the landing began, it plays a major strategic role in that it is a particularly important communication and traffic center in the department of the Channel. Saint-Lô is placed under the responsibility of the General der Fallschirmtruppe Eugen Meindl commanding the II. Fallschirmkorps.

As early as June 6, 1944, the town of Saint-Lô was bombed by the Allies, which aimed at the railway station and the power station: every day for a week, air raids continued, gradually transforming the commune into a heap of ruins and Nearly 800 inhabitants are killed in the bombing of the night of June 6-7.

As of July 11, 1944, the Americans of the 29th Infantry Division (northeast) and 35th Infantry Division (in the north) are only about three kilometers from the city. They are opposed to the survivors of the 352. Infanterie-Division and the Fallschirmjäger Regiment 9 (3. Fallschirmjäger-Division). The progress of the assailants is slow and difficult: they are subjected to the permanent and precise firing of German artillerymen who cause heavy losses. On the other hand, the torrential rains that have poured into the area. Three hills are still separating the two camps: north of Saint-Lô, Hill 122, to the north-east, Hill 147 and Hill 192. 2nd Infantry Division seizes Hill 192 that same day and the fighting for control of the other two hills begins.

On July 15th, the 116th Infantry Regiment (29th Infantry Division) commanded by Colonel Philip R. Dwyer settled south-west of Hill 147, but Hill 122 still does not fall: the 1st Battalion of the 134th Infantry Regiment 35th Infantry Division faces this movement of land defended by the Germans, at the height of the hamlet of Emilie. Eugen Meindl, who realized that the Americans were unable to seize Hill 122, strengthened the system by deploying new troops belonging to the 266. Infantry Division: The Germans took full advantage of this high point by placing their Artillery observers who trigger deadly barrage as soon as their opponents make the slightest movement. At 8.30 pm, when they were only about 1,000 meters from the first settlements, the Allies launched a new bombing of German positions in the Saint-Lô area. The 116th Infantry Regiment (IR) launches a new attack at nightfall directed towards the east entrance of the city, but the front still does not fall; On the contrary, the 2nd Battalion under the command of Major Sidney V. Bingham, Jr. found himself isolated from the rest of the regiment by German shots and had to hold all night with his men who had very little ammunition.

On July 16, the Germans attacked northward and positions held by the 1st Battalion of the 134th IR of the 35th Infantry Division, but the Americans stand firm and counter-attack in spite of an imposing artillery barrage: they pursue Their advance and take Hill 122. The capture of this high point allows the assailants to have an essential asset for the continuation of the fighting: from this position, they have a clear view on the whole of Saint-Lô. The 116th IR launches a new attack headed east of the city to re-establish liaison with Major Bingham who is still isolated but unsuccessful. The next day, 17 July, the 3rd battalion of the 116th IR commanded only four days ago by Major Thomas D. Howie began a discrete advance before dawn to join the defensive perimeter held by the 2nd battalion at the hamlet of Martinville, 1,000 meters east of Saint-Lô. Despite machine gun fire and the explosion of German mortar shells, Major Howie’s men respected an extraordinary fire discipline and did not retaliate to preserve discretion. When the two battalions finally established the connection, shortly after dawn, Colonel Dwyer asked his men if they were able to continue to advance towards Saint-Lô. Major Howie replied by radio that he was able to fulfill the mission; Moments later, German shells explode on US positions and kill Howie. Captain William H. Puntenny then took command of the 3rd Battalion. Wishing to revive his unit in the battle, he was blocked by the German line of defense: Bingham and Puntenny were still isolated from the rest of the regiment and Dwyer tried to refuel them as best they could. Meanwhile, the 35th Infantry Division is advancing to the northeast periphery of Saint-Lô, but the leading units are exhausted by the fighting.

The Germans lacked reinforcements to hold the city and the taking of Hill 122 by the Americans put in danger all the defensive positions north of Saint-Lô. The possibility of a general retreat is approached within the General Staff of Meindl: in total discretion, the Germans begin a phase of withdrawal of their positions to the north of the city. On July 18, the 115th IR commanded by Colonel Ednie attacked from the west and did not meet the terrible resistance they have been accustomed to for several days: Ednie reports this new situation to Major General Charles H. Gerhardt who orders his Brigadier-General Norman D. Cota, to stand by with his Task Force. Forty minutes later, Gerhardt added that he wanted Major Howie’s corps to accompany the soldiers during the conquest of Saint-Lô, in tribute to all the American soldiers who had fallen for that city. At 1500 hours, the Task Force Cota (also known as Task Force “C”) started up, with 600 men: it was armed by a detachment of the 29th Recce Squadron Mechanized on M8 reconnaissance vehicles, company C of 175th IR , A platoon of the 747th Tank Battation, a section of the 121st Engineer Combat Battalion, a reconnaissance platoon of the 821st Tank Destroyer Battalion, company B of the 803rd Tank Destroyer Battalion, Artillery observers (227th Field Artillery Battalion and Divisional Artillery Headquarters), a detachment from the 29th Military Police and a detachment of the Civilians Affairs. Task Force C crosses the lines of the 1st battalion of the 115th IR which is the element of the division closest to Saint-Lô and engages the fight to infiltrate the city. Despite the artillery, machine-gun and small arms fire, despite the obstacles on the road, General Cota’s men managed to clear their way and entered the commune from the northeast starting at 6 pm. They installed a defensive perimeter close to the cemetery (where the Blanchet family vault was used as a command post by Major Glover S. Johns, commander of the 1st battalion of the 115th IR) – and continue from this position the cleaning operations of Saint-Lô. Strong street fights take place, particularly at the crossroads of La Bascule. The priority objectives (bridges, crossroads, heights) are under control at 7 pm. Some pockets of German resistance remain but do not worry the American forces who discover with satisfaction that the bridges on the Vire river are practicable.

The spindles dedicated to the committed units force the 35th Infantry Division to bypass Saint-Lô by the north-west without penetrating it. Its commander, Major General Paul W. Baade, requested that the spindles be modified so that he could participate in the liberation of the city, but the General Staff refused, considering that the commitment of two divisions in Saint-Lô risks creating more problems than anything else. If the city is under control, it is not safe from the enemy’s artillery that is still firing on the smoking ruins. The Germans quickly prepare a counterattack that fails, pushed back by the Americans, and they retreat one kilometer south of the city. Major Howie’s body is installed in a coffin on a crumbling wall of the steeple of the Sainte-Croix church, covered with a large American flag: in a few hours it becomes the symbol of all the sacrifices for the liberation of Saint-Lô.

Saint-Lô is destroyed to more than 90% by the bombing. This vast field of ruins, where German snipers continue to open fire until 20 July, releases terrible smells of putrefying bodies. The US losses recorded during the fighting were very high: the 29th Infantry Division lost nearly 3,000 soldiers (killed, wounded, missing or taken prisoner) and the 35th Infantry Division about 2000. It takes several weeks for US To allow military convoys to cross the city. The American press prints the history of Major Thomas D. Howie and his fate, but can not write his name because of military censorship. Howie is quickly called the “Major of Saint-Lô” which refers both to the rank of commander and to the function of mayor).

On 2 June 1948, the municipality of Saint-Lô was awarded the French medal of the Legion of Honor and the Croix de Guerre 1939-1945 (awards handed down on 6 June 1948 by the French President Vincent Auriol). Samuel Beckett, an Irish writer who took part in World War II with the French resistance, described Saint-Lô as the “Capital of Ruins”. 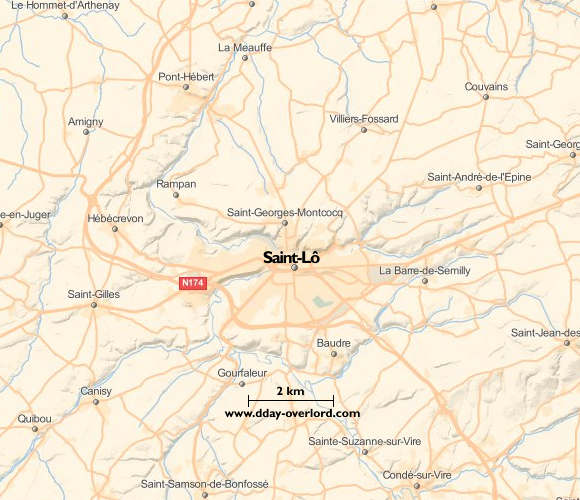