Saint-Manvieu-Norrey in 1944 – Calvados – Battle of Normandy

On June 6, 1944, Saint-Manvieu-Norrey was bombed by the Allied navy and during the day, the Typhoon fighter-bomber, piloted by the Canadian Flying Officer Leonard Ralph Allman, 24, was shot down over the town. Allman, belonging to the 440th Squadron (143th Wing, 83th Group, 2nd Tactical Air Force), crashes on the lands of the commune and dies during the crash.

As of June 9, 1944, the Canadians of the 3rd Infantry Division reached Norrey-en-Bessin, two kilometers north of Saint-Manvieu-Norrey. The Allies hold this position for more than two weeks before they can re-launch the offensive. On June 26, 1944, the British launched Operation Epsom, which was to pierce the front to the west of Caen and to control the bridges over the Odon. The Saint-Manvieu-Norrey area, at the heart of the offensive, is devoted to the 44th (Lowland) Infantry Brigade (15th Infantry Division) and corresponds to the first phase of the offensive (coded “Gout”).

At the first glow of the day, the British triggered a violent artillery fire that affected Saint-Manvieu-Norrey. The Scotsmen of the 6th Battalion Royal Scots Fusiliers, supported by the tanks of the 9th Royal Tank Regiment, then attacked the positions held by SS-Panzerregiment 26 of the 12th SS Panzer-Division Hitlerjugend and reached the outskirts of the village about 7 30. The Germans have been ordered to resist at all costs, and they make no prisoners, defending all the houses and farm-houses during the whole morning; The combats are extremely violent and sometimes end in melee. The houses must be attacked by the flamethrowers (which are equipped with the Churchill Crocodile tanks) to reduce the resistance of the fanatic Hitlerjugend soldiers belonging, in particular, to the 1st and 3rd companies. At 1130 hours, the Scots reached the southern edge of the village and secured access while at the same time continuing to reduce the isolated points of resistance in the heart of Saint-Manvieu-Norrey. They encircle the command post of the first battalion of the S.S.-Panzerregiment 26 defended by the 2nd and 4th companies and which resist until the end of the afternoon. An attempt to break this encirclement is carried out from the east by two companies of the 21 Panzer Division, but their momentum is stopped by an artillery barrage triggered by the batteries of the 181st Field Regiment (15th Infantry Division).

At about 5:00 pm, the 6th King’s Own Scottish Borderers, which was in reserve until then, enters Saint-Manvieu-Norrey and relieves the 6th Battalion Royal Scots Fusiliers, severely affected by the fighting. This regiment records the loss of 21 killed commanding officers, 113 wounded and 9 missing. Scots suffered further losses before nightfall before the 44th Infantry Brigade was relieved by the 129th Infantry Brigade of the 43rd Infantry Division. Once the darkness was complete, the last Germans still in the village gathered and managed to cross the opposing lines in the direction of the village of Marcelet. 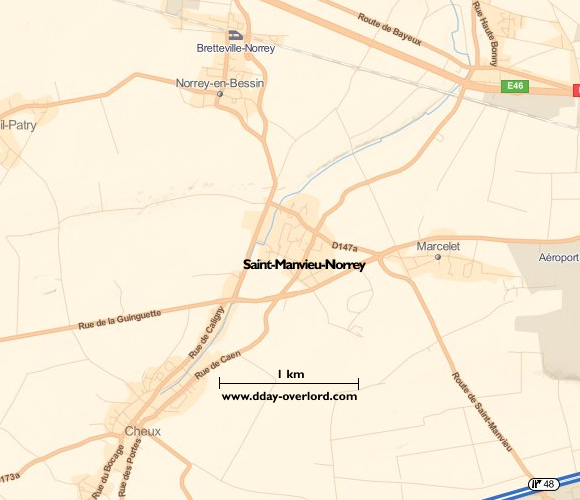