In the spring of 1944, the village of Saint-Marcouf was occupied by the 6th company of the Oberleutnant Geissler belonging to the Grenadier-Regiment 919 (709 Infantry Division). The commune is situated to the north of the head of the bridge that the Allies want to install in the Cotentin on D-Day. Facing the village, in the Channel, two islands (Ile de la Terre – Island of Earth – and Ile du Large – Island of the Large) form an archipelago which also bears the name of Saint-Marcouf.

The German battery often known as the “battery of Saint-Marcouf” is actually located in the commune of Crisbecq, further north.

Although Saint-Marcouf is more than six kilometers north of the “A” coded jump zone designated by the Americans for the release of the 502nd Parachute Infantry Regiment (101st Airborne Division), several American sticks land in the immediate vicinity of the village in the first hours of June 6, 1944, victims of navigational errors by pilots who are hampered by the firing of German antiaircraft artillery. These paratroopers belong to the 502nd Parachute Infantry Regiment (PIR) and the 508th PIR (82nd Airborne Division). They drive all night towards the south to reach their respective rally point.

The Allies are also interested in the Saint-Marcouf Islands. They are convinced that the Germans have placed on the ruins of an ancient bastion built by Napoleon III an advanced observation post or a control post for underwater mines in the Bay of Seine (German soldiers having been spotted by the Allied Aviation on the largest island in May 1944). These two islands must therefore be under control before the landing operations begin. Shortly before 4:30 am on D-Day, four American soldiers armed only with knives landed on the shores of the two islands to mark the beaches. Sergeant Harvey S. Olson (he was awarded the Silver Star for his actions on the Saint-Marcouf Islands, and died in 2002) and Private Thomas C. Killeran of Troop A (4th Company) Sergeant John W. Zanders and Corporal Melvin F. Kenzie of Troop B (24th Company). The two islands are deserted but mined. These soldiers were the first Americans to land in Normandy on June 6, 1944. At 4:30 am, two hours before H-hour, a combined detachment of the 4th and 24th Cavalry companies commanded by Lieutenant Colonel Edward C. Dunn landed on the Saint-Marcouf islands. An hour later, at 5:30 am, the 132 men of the detachment landed and occupied the islands. The mines and then the German artillery fire in the afternoon of June 6 (whose effects are still visible on the remains today) cause the death of 2 men and make 17 wounded.

On the evening of June 7, 1944, the 1st Battalion of the 22nd Infantry Regiment (4th Infantry Division) continued its offensive towards the north and reached Saint-Marcouf where it fought hard fights. On its left flank, the progression is slower and the forehead forms a salient that weakens the American lines. The Americans entered the village but were caught by a 75 mm gun from the Crisbecq battery, forcing the 1st Battalion to retreat south, in front of the hamlet of the Dodainville Village, which was liberated Earlier in the day. The regiment took advantage of the night to reorganize and prepare for the next day’s offensive, while the Germans relocated to Saint-Marcouf, which they had to abandon a few hours before.

On 8 June, the attack was relaunched but was held up in front of the village where the Germans offered a formidable resistance. The 1st battalion of the 22nd Infantry Regiment progresses with the companies A and B in front, which are then placed in support for the benefit of the companies C which storms the village through the center of the device. The Germans retreated towards Crisbecq and the Americans continued their offensive towards the north. In the evening, the momentum is broken by the opposing defenses and the front does not evolve until June 12, exposing Saint-Marcouf to numerous artillery fire. On that date, the Americans were reinforced by the 1st Battalion of the 39th Infantry Regiment (9th Infantry Division), which took over the various support points along the beach, which were completely under control on June 13th. 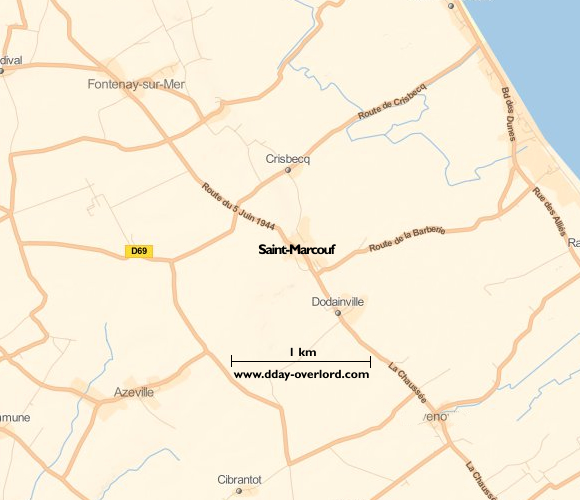