Saint-Pierre in 1944 – Calvados – Battle of Normandy

As part of Operation Perch aimed at ensuring the capture of the city of Caen, the village of St. Peter in the Calvados is released for the first time June 8th, 1944 at 5:30 p.m. by the 8th Battalion Durham Light Infantry Regiment And the 24th Lancers of the British 50th Infantry Division which are opposed to the 1st Panzergrenadier-Lehr-Regiment 901 battalion belonging to the Panzer Lehr Division. The order is given to the 8th Battalion Durham moving to defensive against Tilly-sur-Seulles while the rest of the British forces folds up to the next item 103, located south of the town of Audrieu.

On June 10, after an artillery preparation, 1st Battalion Pz.Lehr.Rgt 901 goes on the attack and managed to seize St. Peter, repelling the English 8th Battalion Durham and Nottinghamshire (Sherwood Rangers) Yeomanry. In the process, these cons attack, supported by the Lancers 24th and by fire from allied warships: the British are again in the village but fail to reject totally the Germans still hold its southeastern part .

The 4th Battalion The Lincolnshire Regiment (of the 146th Brigade of the 49th Infantry Division) reinforces the 8th Battalion Durham Light Infantry Regiment in St. Peter. When the Germans begin the implementation of a new more southerly line of defense, the English attempt acknowledgment south but two Universal Carriers 4th of Lincolnshire are lost under mortar fire in the town.

On 18 June, when Saint-Pierre was still not entirely under British control, a new offensive was launched to seize the entire commune and the open land to the south. This time, it is the 10th Battalion Durham Light Infantry Regiment (70th brigade of the 49th Infantry Division) that must seize Saint-Pierre. The offensive, directed to Tilly-sur-Seulles, was a success for the British who liberated Saint-Pierre on 17 June. 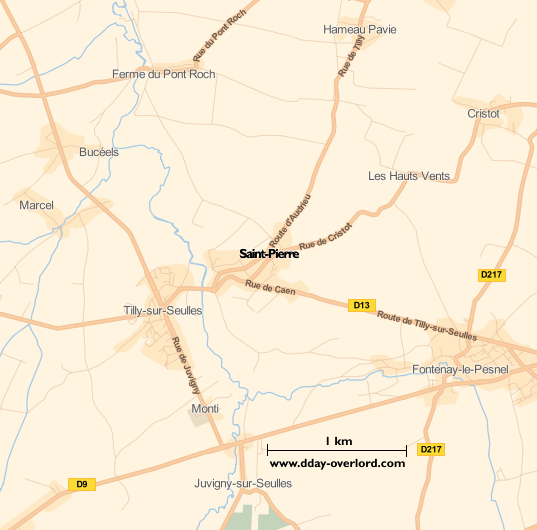