When the Allies set foot in Normandy, the commune of Saint-Vigor-le-Grand must be under control on the evening of June 6th. But the difficulties encountered during the landing phase lead to multiple delays in the initial schedules; The 56th Independent Brigade, temporarily attached to the 50th Infantry Division, arrived at the northern edge of Saint-Vigor-le-Grand at the end of the day on D-Day. The 2nd Battalion Gloucestershire Regiment settled in front of the village and sent patrols that informed the enemy device: they managed to infiltrate Saint-Vigor-le-Grand then into Bayeux and then rejoin their lines.

The next morning, the English soldiers of the regiment entered the village which had been deserted by the Germans. Less than 8 days later, on June 14, 1944, Saint-Vigor-le-Grand was crossed shortly before 3:30 pm by General de Gaulle in his Jeep conducted by Major Sanderson during his flash tour of various municipalities in Calvados. He went to Bayeux to give a speech.

Several personnel serving at the Sommervieu airfield (baptized ALG B-8) are housed in Saint-Vigor-le-Grand. This is the case for Canadian pilots belonging to the Royal Canadian Air Force’s 430th Squadron (39 Recce Wing), from June 16 to August 7, 1944. 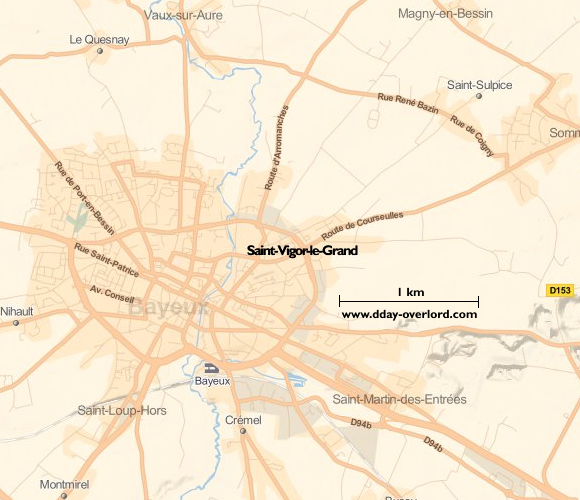