Sainte-Marie-du-Mont in 1944 – Manche – Battle of Normandy

In the spring of 1944, the village of Sainte-Marie-du-Mont was occupied by some sixty personnel belonging to the Artillery-Regiment 191 (91. Infanterie Division). It is less than one kilometer east of the coded “C” drop zone, which is shared by the 506th Parachute Infantry Regiment and the 3rd Battalion of the 501st Parachute Infantry Regiment of the 101st Airborne Division. One kilometer west of Sainte-Marie-du-Mont is the Holdy battery, occupied by the II. Abteilung of the Artillery-Regiment 191 and armed with four howitzers of 10.5 cm Geb.Haub. 40.

On the night of June 5-6, 1944, the parachutage did not proceed as planned for 101st Airborne and many airborne soldiers were not dropped to the right places. On several occasions, US parachutists are dropped over or near the village, mostly belonging to the 506th PIR: some are taken to task while they are still in the air and are fighting directly after their landing. Isolated groups cross the alleys in the dim light. One of the paras covers the recess behind the fountain equipped with a water pump: from this position he opened fire and killed several Germans. First-class soldier Ambrose Allie of the Staff Company of the 3rd Battalion of the 501st PIR landed on the roof of a house and dropped by unhooking his harness: he was then taken prisoner by the Germans who plaster him Against the wall to shoot him. But two American paratroopers not far from there open fire, making the two gunners flee and saving the life of their comrade. The parachute of a soldier clings to a corner gable of the steeple of the church of Sainte-Marie-du-Mont.

A parachute stick is dropped over the Holdy battery: they are killed or taken prisoner when they landed by Artillery-Regiment 191 artillerymen. Some of the paratroopers jumping near the place (including George E. Koskimaki, 502nd PIR, General Taylor’s radio operator) testify to the terrible tortures done on the prisoners: cries are heard a good part of the night coming from the battery. At the dawn of the 506th PIR command line company (led by Captain Lloyd E. Patch) and the Charly company (commanded by Captain Knut H. Raudstein) of the 1st Battalion of the 506th PIR, reinforced by a dozen Paratroopers of the 502nd PIR take by storm the position defended by some fifty Germans. A bazooka shot blew up a stockpile of ammunition, killing and injuring several artillerymen. The paratroopers seized the four howitzers after a quick but violent battle and discovered the lifeless bodies of several American soldiers mutilated with bayonets. Some were emasculated and burned with their own thermal grenade. The position is under control, but isolated shots are heard and force the Americans to remain under cover. Captain Patch entrusts the guard of the site to the elements of the 502nd PIR and then goes to Sainte-Marie-du-Mont.

In the meantime, 1st Sergeant David Buck Rogers and Sergeant Major Issac Cole (1st Battalion, 506th PIR) are investing the church and its bell tower, a great view of the area from which they can apply fires with a small Group of paratroopers. Later in the morning shells were fired at the bell tower and one of them touched the building without causing any injuries. The origin of the firing was uncertain, but they were probably fired by one of the guns of the battery of the Holdy under the orders of the American sergeant William King who thought that the steeple was still in the hands of the Germans. Colonel Sink, the 506th PIR’s corps commander, sent three Jeeps to retrieve the Holdy’s battery, but the 502nd PIR elements in charge of securing the site under Captain Raudstein destroyed three of the four howitzers before Vehicles, fearing they would fall into the hands of their opponents in the event of a counterattack. Rogers and Cole saw little before midday a German tracker heading for the church square. As soon as they were within range, they opened fire. The passenger pulls out of the vehicle to find a cover but is hit and collapsed. The driver attempts a reverse but is killed in turn.

Early in the afternoon, landed troops from the 2nd and 3rd battalions of the 8th Infantry Regiment (4th Infantry Division) coming from Utah Beach pulled out of the shore and into the inland, respectively, by the roads named “Exit 1” and “Exit 2” by the Americans. They take part in the capture of Sainte-Marie-du-Mont, notably with the support of the Sherman tanks of the 70th Tank Battalion, which is entirely under control in the early afternoon. Two German soldiers, who had hidden in the confessional of the vicar of the church, are taken prisoner around 18 hours by the American military police. 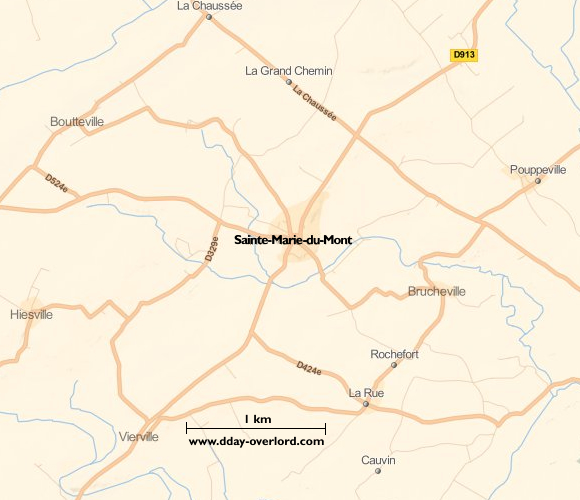 Temporary closure of several D-Day museums in Normandy due to the Coronavirus health crisis.

Calendar of the D-Day and Battle of Normandy 76th anniversary ceremonies.