During the Battle of Normandy and the setting up of a large trap in which the Allies hoped to capture several hundred thousand Germans, the Americans plan to close this pocket north of Sées. On August 11, 1944, the Combat Command A (CCA) of the 5th Armored Division commanded by Major General Lunsford E. Oliver crossed the Sarthe and continued north, followed by Major General Ira T. Wyche’s 79th Infantry Division. Meanwhile, the Germans of the 9. Panzer-Division and the 116. Panzer-Division are responsible for securing the area to cover the retreat of the 110,000 soldiers conducted in encirclement.

On August 12, the CCA commanded by Brigadier-General Eugene A. Regnier succeeded in seizing Sées shortly after 10 o’clock, the Germans having had no time to defend the commune. They test the American device of the 5th Armored Division in spite of everything, but they do not benefit from support, they prefer to cancel any massive attack. An hour after the liberation of Sées, soldiers of the 2nd French Armored Division under General Leclerc’s orders crossed the city, although they should not be located in the spindle reserved for the 5th Armored Division. Leclerc, An initiative to move east from the forest of Ecouves to Carrouges, crossing Sées, contrary to the orders of Major General Wade H. Haislip (commander of the XV Corps) who specify to cross the west of this forest. The columns of soldiers and French vehicles created a large traffic jam which delayed the continuation of operations by six hours and in particular the assault in the direction of Argentan. The mayor of Sées, Charles Forget, and the head of the Interior French Forces in the Orne district, Major André Mazeline, guide and orient the Allies as best they can. The French of the 2nd Armored Division resume the progression from 1 pm. Elements of the 116. Panzer-Division were ordered to position themselves north of Sées to prohibit any allied advance towards the north, but the CCA took speed and advanced towards Argentan, thus removing the fighting of Sées. 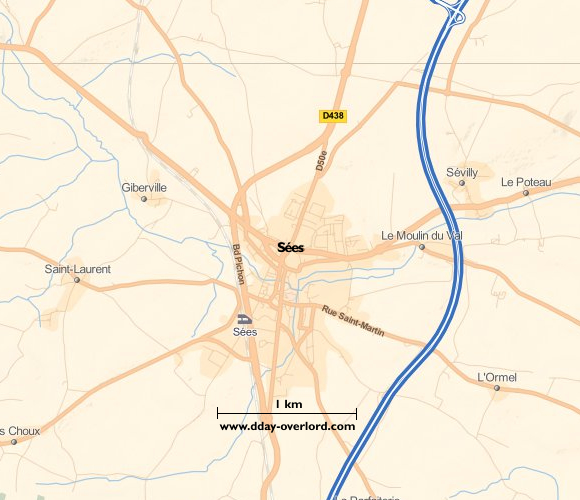