Soliers in 1944 – Calvados – Battle of Normandy

The municipality of Soliers is located northeast of an area called Verrières ridge that overlooks the area between Caen and Falaise. It is defended by elements of the 272. Infantry Division. In accordance with the plan of Operation Goodwood, launched on July 18, 1944, it was the 7th British Armored Division which was entrusted with taking a foot north-east of the ridge of Verrière and seizing Bourguébus. Must liberate the village of Soliers.

The Cromwell tanks of the 5th Royal Tank Regiment (22nd Armored Brigade) suffered great losses during this first day of offensive despite the power of the bombings that fell on the German positions before the assault. The regiment settled in defensive for the night north of Soliers and took advantage of a few hours of halt to reorganize in view of the fightings of the following day.

On July 19, 1944 at dawn, the assault resumed. But the German soldiers, reinforced by elements of the SS Panzer-Division “Leibstandarte Adolf Hitler”, stand firm and once again offer a formidable resistance. However, they are tested by the fighting and the bombings which have not stopped all the more as all the reserves are engaged: they fold towards Bourguébus, leaving Soliers to the 5th RTR. 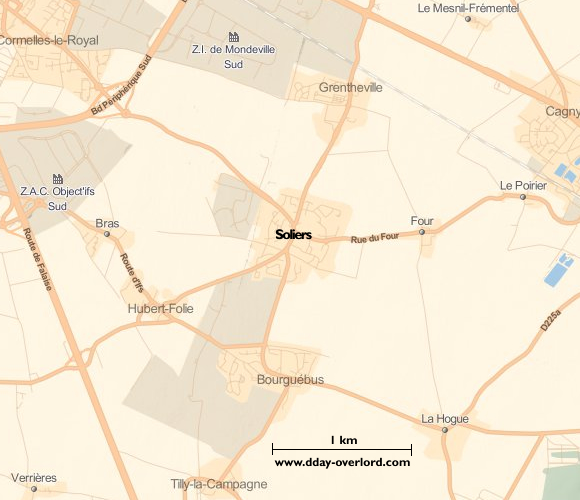