As early as June 7, 1944, the Allies bombed the commune of Trun for the first time in order to slow down the advance of the German reinforcements heading towards the beaches of the disembarkment. Several other air raids hit the city until his release. A reception and care center for Norman refugees is set up in the commune (40,000 civilians pass through this center).

The Allies renew major air raids reinforced by artillery bombardments as of August 12, 1944. The Anglo-Canadians want to exploit the results of Operation Totalize and General Crerar, commander of the newly formed Canadian 1st Army, looks at the tactical possibilities of breaking through the German lines of defense and reaching Falaise then Trun at the earliest. This new ground offensive is called Operation Tractable. On August 17, 1944, when the last pockets of German resistance were neutralized by the Canadian soldiers at Falaise, the Allies took the direction of Trun. On the morning of August 18th, the Poles of the 1st Armored Division under the command of General Stanislaw Maczek first secured the land movement to the north of the commune (Hill 118) and then seized a portion of the axis linking Trun to Vimoutiers (departmental road 916). Rapid fighting has begun but the Germans have already started the withdrawal and have abandoned Trun to their opponents.

Supported and covered to the north and northeast by the Poles, the Canadians of the 4th Armored Division commanded by Major General George Kitching began their assault on Trun starting at 2 pm. Armored vehicles, lighted by elements of the 29th Armored Reconnaissance Regiment, “The South Alberta Regiment,” belong to the Lake Superior Regiment and the 22nd Armored Regiment “The Grenadier Guards” of the 4th Armored Brigade while the infantrymen are from Lincoln and Welland Regiment of the 10th Infantry Brigade. The Poles, who in turn attacked the northern outskirts of Trun, engaged the 24th Lancers Regiment (10th Armored Brigade). With the Allies aiming to prevent any German counter-offensive to take over the key towns in the area, Canadians and Poles immediately secure the various roads crossing Trun and prohibit their access.

The commune of Trun, deserted by the Germans at the arrival of its liberators, is destroyed to almost 70%: 450 buildings are destroyed or touched by the successive bombardments. 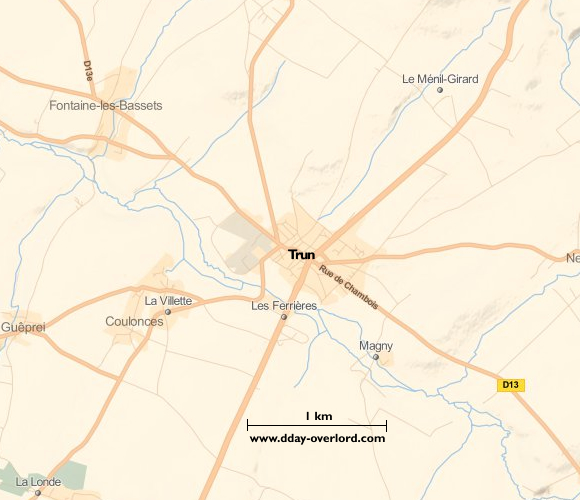