Vierville in 1944 – Manche – Battle of Normandy

In the spring of 1944, the hamlet of Vierville was occupied by soldiers belonging to the third battalion of Grenadier-Regiment 1058 (91. Infanterie Division).

On June 6, 1944, Vierville was located between two parachuting zones of the 101st Airborne Division: the drop zones “C” to the north and “D” to the south, dedicated to the 501st and 506th Parachute Infantry Regiments. During the dropping operations, several paratroopers do not land at the place originally planned and two sticks of the 3rd battalion of the 506th PIR are virtually dropped on Vierville. The German soldiers of Grenadier-Regiment 1058 manage to hold the village and are reinforced during the day by a battalion of the Fallschirmjäger Regiment 6: these men quickly find themselves isolated among hundreds of American paratroopers.

On the evening of June 6 in his command post at Culoville (a place about 500 meters north of Vierville), Colonel Robert Sink, the 506th PIR commander, was ordered to reconnoitre south towards the bridges on the river Douve. For this purpose, it wants to deploy along the departmental road 913 which crosses the town of Vierville in the direction of Angoville-au-Plain.

On the morning of June 7, 1944, the 1st Battalion of the 506th PIR traveled on the road 913 and was continually harassed by snipers. Faced with a localized resistance at the height of Vierville, the 1/506th PIR seizes one by one of the dwellings and discovers, once the hamlet under control, a force composed of several hundred men who progresses towards the south through swamps. At this time, the flooded land formed a discovery with a depth of about two kilometers. The reports describe the soldiers’ progress, but did not specify their identity. Fearing that they would face American soldiers, Colonel Sink ordered that no fire be opened and that a patrol be deployed to establish the liaison With these personnel, without success. It was in fact the battalion of the Fallschirmjäger Regiment 6 which was retreating south of Vierville towards the bridges on the Douve.

Once Vierville was liberated, the Americans resumed progress on two axes: a column (formed by the 1st battalion of the 506th PIR) towards the hamlet of Beaumont, another (2nd battalion of the 506th PIR) towards Angoville-au-Plain. At the exit of the hamlet, the two battalions of paratroopers are fixed by the enemy fire: the intervention of the Sherman tanks of A Company of the 746th Tank Battalion allows the resumption of the progression.

The Vierville castle is used as headquarters by the staff of the 501st PIR: this regiment is placed in reserve for the benefit of the 101st Airborne Division in this sector as of June 8th. 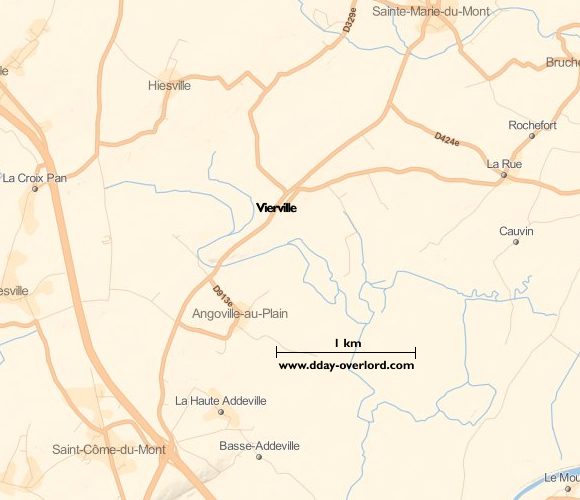